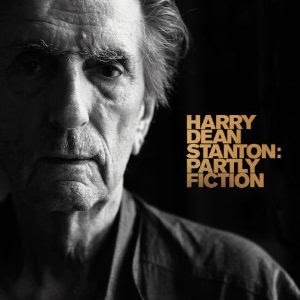 A few years ago a good friend of mine got to jam with Harry Dean Stanton in Joni Mitchell’s house. I thought that was just about the coolest thing ever, and I wish I'd been there. I’ve long been a fan of Harry Dean Stanton’s film work, but knew very little about his musical interests apart from music in a couple of films.

Partly Fiction is actually the soundtrack to the film of the same name, which was directed by Sophie Huber. (I need to see that film.) This is one of the loosest albums I’ve ever heard. It really is like inviting Harry Dean Stanton into your living room to play a few tunes, whatever pops into his head. And in fact, it was recorded in Harry Dean Stanton’s living room. Harry Dean sings and plays harmonica. He’s joined by Jamie James, and on a few tracks by Don Was.

A couple of tracks – “Tennessee Whiskey” and “Canción Mixteca” – were released on a 7-inch picture disc on Record Store Day earlier this year. "Tennessee Whiskey" is so beautiful and features one of many remarkable vocal performances by Harry Dean Stanton on this disc.

The CD opens with Harry Dean Stanton saying: “Now this is all rough. But that’s all right, isn’t it?” Is it ever! Then he begins “Blue Bayou.” Talk about starting off with a difficult one. Roy Orbison had perhaps the most beautiful voice ever in popular music (I was lucky enough to get to see him in concert once). Harry Dean Stanton does start out in slightly rough, personal territory, and then really goes for it on those higher notes, and he does a great job. It’s a touching and pretty rendition, his voice accompanied only by acoustic guitar. That’s Jamie James on guitar. It’s hard to not be affected when Harry Dean sings lines like, “Gonna see my baby again/Gonna be with some of my friends/Maybe I’ll feel better again/On blue bayou.”

“This is a heroin song, by the way,” Harry Dean says at the beginning of “Everybody’s Talkin.’” Listening to his honest delivery of this popular song, it strikes me as strange that he didn’t write it. Fred Neil wrote it, and it was most famously done by Harry Nilsson. But Harry Dean Stanton is really at one with this song. “Pretty song, huh?” he says at the end.

“She Thinks I Still Care”

“She Thinks I Still Care” features some nice work on harmonica by Harry Dean Stanton. And Don Was plays bass on this one.  It’s a sweet and sadly humorous country song written by Dickey Lee and Steve Duffy. “Just because I asked a friend about her/And just because I spoke her name somewhere/Just because I saw her and fell all to pieces/She thinks I still care.” This is one of my favorite tracks. They talk a bit about the song at the end. George Jones had a hit with this one.

Harry Dean speaks the lyrics in English at the beginning of “Canción Mixteca,” then sings it in Spanish. He also mentions, “It’s the theme song of Paris, Texas.” Paris, Texas is one of my favorite Harry Dean Stanton films, and if you haven’t seen it, go buy the DVD today. It’s one hell of a great film, directed by Wim Wenders. And it’s wonderful to hear him sing it on this album.

These tracks are mostly softer, deliciously sad and painful tunes, so it comes as something of a surprise when they jump into Chuck Berry's “Promised Land,” a song I used to see the Grateful Dead do quite a bit. Here Harry Dean really lets loose, having fun, adding some effective pauses, such as before “in downtown Birmingham” and before “smokin' into New Orleans.” He also plays a mean harmonica. And Don Was again joins them on bass. Toward the end Harry Dean sings a line from “Swing Low, Sweet Chariot” a cappella (suggested by a line in Chuck Berry's original, "Swing low chariot, come down easy"). Then they go back into the tune for kind of a big finish. It's wonderful.

"He'll Have To Go" is one that really got to me. It's a love song where he’s apart from his woman, who is with another man.  “Put your sweet lips a little closer to the phone/And let’s pretend that we’re together all alone/I'll tell the man to turn the juke box way down low/And you can tell your friend there with you he'll have go go.”  Harry Dean gives an excellent vocal performance, and plays harmonica. "He'll Have To Go" was written by Joe Allison and Audrey Allison.

Harry Dean follows that with another song of some longing, “Help Me Make It Through The Night,” written by Kris Kristofferson. This is a wonderful song, with lines like “I don’t care what’s right or wrong” and “It’s so sad to be alone.”

At the end of the album, Harry Dean Stanton tackles that old reliable song “Danny Boy,” first saying, “I’ll do ‘Danny Boy,’ what the hell, now that I’m warmed up.” I couldn’t begin to count the versions of this song I’ve heard over the years. Harry Dean’s is really interesting, delivered with minimal guitar accompaniment. At the end he says, “That’s it.” And indeed, that’s it, so it's time to start the album over again.

Partly Fiction was released on June 3, 2014 through Omnivore Recordings. It is available both on CD and on vinyl.
Posted by Michael Doherty at 3:29 PM