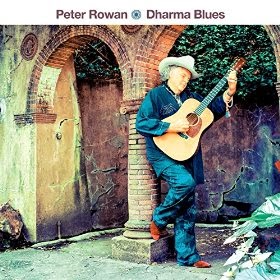 I’ve been enjoying Peter Rowan’s music since I was a teenager when, because of my love for the Grateful Dead, I picked up a copy of Old And In The Way. I listened to that cassette (yes, cassette) over and over, and then kept an ear out for whatever other projects these musicians did. Peter Rowan’s new album, Dharma Blues, is a wonderful group of original songs, all written or co-written by Rowan, and featuring some excellent musicians, including Jack Casady (of Hot Tuna and Jefferson Airplane) on bass, and Gillian Welch on backing vocals.

Peter Rowan begins “River Of Time” a cappella, first solo, then with some gorgeous blending of vocals. It’s a really sweet way of opening the album. Then the song comes on as with a kind of easy country vibe, with touches of gospel in the way the vocals are approached, adding up to a sound that raises your spirits.

He follows that with “Raven.” If you’re wondering if a song titled “Raven” is related to the Edgar Allan Poe poem, yes, it is. The fourth line of the song is “Quoth the raven ‘Nevermore!’” This song has a great, kind of slow bluegrass feel to it, with nice work by Jody Stecher on banjo. This is the one song on the album that Peter Rowan co-wrote, with Warren Weldon. Gillian Welch provides some vocals on this track.

Gillian Welch also joins him on vocals on “Restless Grave.” “And my restless grave cannot contain the soul that gave me birth/I’ll search the wide world, round and round/For that jewel of priceless worth.” There is some nice work on bass by Jack Casady on this track. Gillian Welch also provides vocals on the sweet "Snow Country Girl."

“Dharma Blues,” the title track, begins with a dark, bluesy feel and the lines, “Ain’t no God up in heaven/Ain’t no devil down below.” It’s a very cool track, featuring Manose Singh on flute. And check out what Peter Rowan does vocally near the end – like part yodel, part native American chant.

“My Love Will Never Change”

“My Love Will Never Change” is a pretty folk tune, with some of the lyrics delivered almost like spoken word – “And that old drunken moon, he’s gone with the night/But somehow you take me to a place I’ve never been before.” Then by the end of the first stanza he is singing, but that change occurs in a natural, gradual way, like he intended to tell it as a story, but came to find his thoughts and feeling could be better expressed in song. It’s beautiful. This is one of my favorite tracks.

Peter Rowan follows it with another pretty, relaxed folk song, “Wisdom Woman,” featuring Jody Stecher on mandola. I love that these songs are not in any hurry.

Peter Rowan goes back to something of a bluesy feel on “Arise,” which has an interesting groove when the band comes in. This track features Jack Casady on bass, Jody Stecher on mandola and Dave Easley on pedal steel guitar. There is a haunting quality that at times gives way to something sweeter, as when Peter sings, “Let every living, breathing being/Find happiness.”

"Illusion's Fool" begins like beautiful, mellow journey, like stepping into a dream, with Jody Stecher on oud and Manose Singh on flute. Peter Rowan gives an interesting vocal delivery here, and the song gains in energy and beauty. The lyrics are fairly simple, almost like a meditation or prayer with a glorious breakthrough at the end.

Peter Rowan does the vocals and plays guitar on this album. Joining him are Jack Casady on bass; Dave Easley on pedal steel guitar; Jody Stecher on tamboura, banjo, bass sarod, mandola, and oud; John Chelew on organ and harmonium; Bill Smith on drums; Patrick Korte on drums and marimba; Casey Waits on drums and glockenspiel; Manose Singh on flute; Gillian Welch on vocals; and Glenn Nishida on drum programming.

Dharma Blues is scheduled to be released on July 8, 2014 through Omnivore Recordings.

Posted by Michael Doherty at 6:43 PM