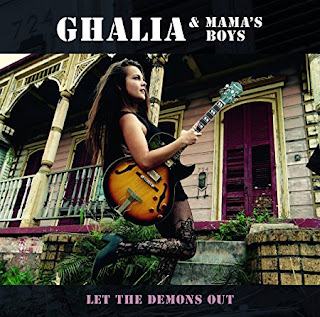 I listen to a lot of music, and sometimes I’ll put a disc on without any expectations or knowledge of the artist and end up getting completely drawn in. It might take a few tracks, but with Let The Demons Out, the new CD from Ghalia & Mama’s Boys, it took about two seconds. I was hooked right out of the gate. Ghalia Vauthier has a sexy voice and style, and the band backing her has a raw power. It’s blues you’d find along the long, dark road to hell, where everyone is aware of the destination and no one gives a fuck because they’re having too good a time. Yeah, the band rocks and cooks, and Ghalia’s voice leads us all in this wonderfully twisted celebration. She knows exactly what she’s doing, the power she has over us, and delights in using it. And we wouldn’t have it any other way.

The album gets off to a great start with “4 AM Fried Chicken,” a fun, rockin’ blues tune taking place in New Orleans, featuring some playful touches by Ghalia on vocals (as on lines like “Been drinkin’ a lot of moonshine and having a heck of a time”). I could do without the “Finger-licking good” bit at the very end, but other than that I love this track. It’s an original song, written by Ghalia Vauthier, as are most of the tracks on this album. Johnny Mastro is a force of his own on harmonica. That’s followed by the CD’s title track, “Let The Demons Out,” which has a cool, raw, tough, immediate sound. Ghalia leads the ceremony, urging her congregation to “Let the demons out.” And you know by the end of the song, things are going to get pretty crazy. “You can let them out, just let them out/Let them out, just let them out.” Perhaps we’ll all be a lot more healthy if we let our demons out. We’ll find out. Sometimes I love music with a dangerous vibe. Who doesn’t love a woman who could kick our ass? And within the music of “Press That Trigger” lurks the sense of possible danger or pain, as she readies to unleash her own desires. We all know pleasure and pain are closely united, and in this music it is like there is no difference at all. It’s fantastic and raw and real. “Come on, babe, find the right tool/To polish my jewel/You know what’s on my mind/Don’t be kind.”

“Hoodoo Evil Man” is a lot of fun. While we fall under Ghalia’s spell, she sings about people falling under a man’s spell in this one. “And if he looks at you, you get mesmerized/And no doubt, you’ll get paralyzed.” I love the use of backing vocals on this track, on the word “hoodoo.” That adds to the fun of this song. There is also some nice work on both guitar and harmonica. And then in “Addiction” I love that section led by harmonica. Man, this song really digs its way into you and takes over. “Well, I know he’s gone for good/Down back south/I’d go with him if I could/Just to feel the fire of his mouth.” Wow.

The only cover on this CD is “I’m Shakin’,” a song written by Rudolph Toombs and originally recorded by Little Willie John. Ghalia & Mama’s Boys do a great job with it, and this ends up being another of my favorite tracks. That’s followed by “Waiting,” a song written by Johnny Mastrogiovanni (Johnny Mastro) and Lisa Mastrogiovanni, and here lead vocal duties are shared by Ghalia and Johnny Mastro. This is a solid blues rock tune. “Hey Little Baby” first feels to me like a strange, haunted gospel tune. Sure, there isn’t much to the lyrics, but it’s Ghalia’s voice that pulls you in, almost regardless of what she’s singing, and this ends up being a really effective track. The only track I don’t care all that much for is “Hiccup Boogie,” which ends the album. It’s just not as interesting as the others, and the hiccup sounds are kind of off-putting. But the rest of the album is seriously good.

CD Track List
Let The Demons Out is scheduled to be released on January 12, 2018, but apparently was released in Europe in October.
Posted by Michael Doherty at 8:13 PM