The Mimosa Music Series continued yesterday with an excellent set by The Dustbowl Revival. If you’re unfamiliar with the series, it’s put on at The Federal Bar in North Hollywood and hosted by Gary Calamar. There is a nice, relaxed vibe to these shows, which I appreciate. People drink mimosas and eat breakfast while enjoying the music. I’ve spent some damn good Sunday mornings and early afternoons at these shows. And yesterday The Dustbowl Revival made me happy the moment they started playing. Horns and a mandolin? Oh yes, I’m on board!

The band focused on material from the new, self-titled album, playing “Gonna Fix You,” “Busted,” “Got Over,” “Debtors’ Prison” and “The Story.” And, perhaps because the show was billed as the “Gala Holiday Show,” The Dustbowl Revival played a Christmas song. They delivered a really pretty and heartfelt rendition of “Have Yourself A Merry Little Christmas.” They also did an absolutely wonderful rendition of Supertramp’s “Breakfast In America,” and the appropriateness of the song was certainly not lost on the band or the audience. This was probably the best cover version I’ve ever heard of this song, with some excellent work on mandolin, violin and horns. Seriously, it was fantastic. 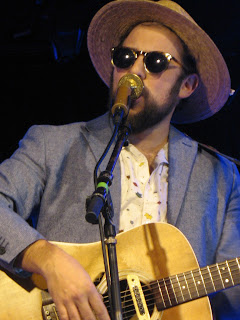 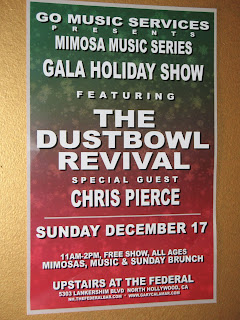 The Federal Bar is located at 5303 Lankershim Blvd. in North Hollywood, California. If you go, I recommend getting the bread basket. It’s delicious.
Posted by Michael Doherty at 10:28 PM