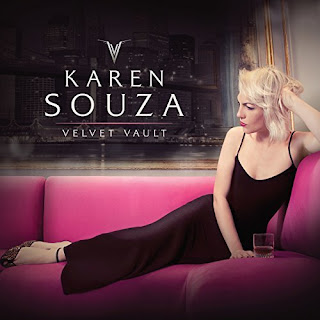 Vocalist Karen Souza is known for her soulful jazz renditions of pop hits, particularly songs from the 1980s such as “Do You Really Want To Hurt Me?” and “Every Breath You Take.” On her new release, Velvet Vault, she expands her repertoire. Yes, there are still some pop hits, like Elton John’s “Don’t Let The Sun Go Down On Me” and 10cc’s “I’m Not In Love” and even The Cure’s “In Between Days,” but there is also some classic material such as Sammy Cahn and Jule Styne’s “I Fall In Love Too Easily,” as well as some original numbers, co-written by Karen Souza.

She opens the album with an excellent rendition of “I Fall In Love Too Easily.” Her delivery is so intimate, her voice feeling like it is right in our ears, like she’s confessing directly to us. It’s almost like she’s resting her head on my shoulder, and the track has a delicious, perfect late-night vibe. Her voice is the focus, with light touches on the piano, bass and drums that accompany her. That’s José Reinoso on piano. Reinoso also arranged and produced most of the tracks on this album. Then when the horn comes in, it’s as if to keep her company, to support her. That’s Sergio Wagner on trumpet. This is one of my favorite tracks. José Reinoso accompanies Karen Souza on guitar on the following song, an interesting and cool cover of Elton John’s “Don’t Let The Sun Go Down On Me,” but Karen’s voice is still the focus. In fact, the song begins with her voice, rather than the piano which begins the original version. As the drums come in, the song takes on a brighter tone for the chorus, becoming closer to the original.

“I’m Beginning To See The Light” is a more playful tune from the start. It was written by Duke Ellington, Don George, Johnny Hodges and Harry James, and has become a jazz standard. Karen Souza’s rendition features a relaxed, groovy jazzy rhythm on guitar and bass. And again, her vocals have an intimate quality. The second half of the song includes some nice work on horns. Tom Malone plays trombone, and Sergio Wagner plays trumpet on this delightful track. Japanese vocalist and flugelhorn player Toku joins Karen Souza on “You Got That Something,” one of the disc’s original compositions. It was written by Karen Souza, Pamela Oland and David Nathan, and is delivered as a playful duet. She sings “I’m inclined to believe that you’re flirting, but I kind of like it,” and he sings “Making progress.” Yeah, it has that kind of a fun vibe to it. And I dig Toku’s work on flugelhorn. The album’s other original track is “In The Blink Of An Eye,” which features Fiorella Cominetti on flute. It was written by Karen Souza, Pamela Oland and Leandro Peirano. “Was it a dream/Felt your hands on my skin/And I burned with the touch/That could never begin.”

On Essentials, Karen Souza offered a cool jazz version of Depeche Mode’s “Personal Jesus.” On this new release, Karen delivers an unusual and effective take on The Cure’s “In Between Days,” featuring some pretty work on keys by José Reinoso. Karen also gives us a fun, jazzed up rendition of Lou Reed’s “Walk On The Wild Side,” with a strong, pronounced Latin rhythm. There are no backing vocalists giving us the “doo doo-doo” bit. Instead, the horns do that part. The album ends with a thoughtful version of MGMT’s “Kids.” “Control yourself/Take only what you need from it.”