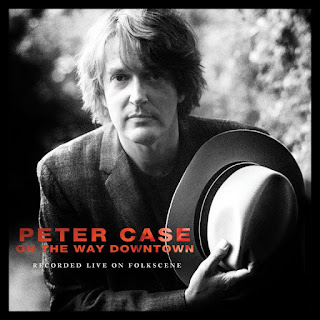 Peter Case, a member of The Nerves and The Plimsouls, began his solo career with a seriously good self-titled album in 1986 (which was re-issued last year), and has been releasing excellent solo work ever since, mixing in elements of punk and rock with folk in his original material. His new release, On The Way Downtown: Recorded Live On FolkScene, features music from two performances on the radio program FolkScene on KPFK in Los Angeles – one from 1998, the other from 2000. Here you have all that raw, exciting energy of one of his concert performances, but without the crowd noise. The sound is excellent. None of these recordings have been previously issued on CD.

The first nine tracks were recorded on March 1, 1998. The musicians backing him on this session are Andrew Williams on guitar and backing vocals, Greg Leisz on guitar, Sandy Chila on drums, Don Heffington on percussion, and Tony Marsico on bass. The first track includes a brief introduction by Howard Larman, calling the band Peter Case And Friends. And then Peter Case gets things going with “Spell Of Wheels,” the lead track from his then brand new release Full Service No Waiting. This song tells the story of five young small-time criminals who make a getaway through the snow, ending up in a different location, but the same place. Here is a taste of the lyrics: “We get to Minnesota, spend the winter in monochrome/Fall in with small time criminals just like the ones at home/Watchin’ through the windows for what the night reveals/And waitin’ for the spring to come/Beneath the spell of wheels.”  Sometimes when I listen to this song, I wonder who it is that the character is singing to; after all, there is the line “I’m on my way back home to you,” sung when he thinks they are all about to die. “Spell Of Wheels” was written by Peter Case and Joshua Case. Peter Case plays harmonica on this track.

Peter introduces the next song, “On The Way Downtown,” the song used as this release’s title track, “This is about a visit back to the town where I grew up.” “On The Way Downtown” is also from Full Service No Waiting. In fact, all nine songs from this first radio show are from that album, and the first five are performed in album order. “On The Way Downtown” was also written by Peter Case and Joshua Case, and is one of my favorite tracks. This one really moves me. “I had a fight with the woman that had my kids/Couldn’t get along with anyone, what if I did/I’m going back to the corner where we used to meet/When our dreams were young and the nights were sweet.” Wow, this recording is reminding me what a strong album Full Service No Waiting is. Check out these lyrics from “Green Blanket (Part 1)”: “It’s too late tonight/For a miracle cure/And if this rain keeps on falling/It’ll wash me away/Down through the gutter/And out to the bay/Where the red and the gold/And the silver fish play/That’s someplace where no one will find me.” Then “Honey Child” is a lot of fun, sounding like a celebration at a cool road-side tavern out away from the city somewhere. At the end, Peter, apparently not satisfied, asks, “Howard, can we do that one again, man?”

He introduces “Crooked Mile,” saying, “I guess I’m going to play it alone.” To the other musicians he then says, “If any of you guys feel like jumping in, go ahead. I feel kinda weird with all these guys just sitting around looking at me while I play.” I love his guitar work on this song. This is a powerful, strong rendition. The guys can’t help but applaud him at the end of it. Peter Case ends this first session with “Until The Next Time,” a song whose beauty somehow always catches me by surprise. “Until the next time/The race starts close to the finish line/And down in my heart/I know this could be the start of something.”

The other nine tracks are from July 30, 2000. As with the earlier session, here Peter Case is promoting a studio release, this time Flying Saucer Blues. However, this time not all of the songs are from that new release. Joining him for this session is David Perales on violin and backing vocals. There is no introduction this time, and Peter Case starts with “Something Happens,” identifying it as a song from Flying Saucer Blues. This is a beautiful and sweet song. “Each time I hold you in my arms/I’m set free from all harms/I seem to know what to do/Something happens when I’m with you.” Oh yes, that’s an incredible feeling, isn’t it? May we all experience that in the coming year.

Peter Case follows that with a cover of Mississippi John Hurt’s “Pay Day,” a song not included on Flying Saucer Blues. Actually, I don’t think it’s on any of his studio releases. (It was, however, included on the compilation, A Tribute To Mississippi John Hurt: Live At The Cambridge Arts Theatre.) Peter jokes a bit at the beginning, asking David if he wants to play a John Hurt song, then immediately adding, “Sure you do.” And it’s a damn good rendition. Peter then returns to material from Flying Saucer Blues, playing “Blue Distance” and “Walking Home Late.” Between those two songs, there is an introduction, a station identification of sorts: “Live from Studio A, our guests are Peter Case and David Perales.” Then Peter Case tells us a bit about “Walking Home Late” before they start the song. “Today at noon I thought I’d disintegrate/But it’s cooling off now, and I’m walking home late.”

Peter dips into his earlier work with “Icewater,” a blues song from his self-titled debut album. This is a delicious and fun version, with Peter playing harmonica. David’s work on violin is absolutely wonderful here, helping to make this track one of the CD’s highlights. They then play “Beyond The Blues,” a song from Six-Pack Of Love, and a perfect choice to follow a blues tune. This one was written by Peter Case, Tom Russell and Bob Neuwirth. “We hit the fork in the road/Where we all have to choose/Between the darkness and life beyond the blues.” Peter follows that with two more songs from Flying Saucer Blues – “Coulda Woulda Shoulda” and “Paradise Etc.” – before wrapping things up with a cover of Charlie Poole’s “Leaving Home.” I love this line from “Paradise Etc.” (another of my favorite tracks): “The apocalypse is over and I still owe rent.” Seems rather fitting these days, doesn’t it?

CD Track List
On The Way Downtown: Recorded Live On Folkscene was released on October 27, 2017 through Omnivore Recordings.
Posted by Michael Doherty at 8:47 PM