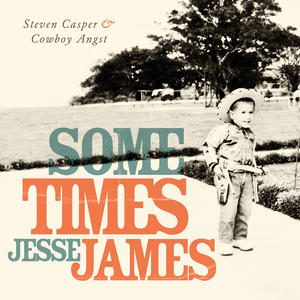 I’ve learned to pay attention to the projects that certain musicians choose to be a part of, and John McDuffie and Carl Byron are two such musicians. They haven’t steered me wrong yet, and they are both part of Steven Casper & Cowboy Angst, a band that I was turned onto a few years ago with the release of Endless Sky. This group crafts and delivers some wonderful songs, mixing country, folk, blues, pop and rock elements, and their new EP, Sometimes Jesse James, features mostly original material, written or co-written by Steven Casper. The band is made up of Steven Casper on lead vocals and guitar; Carl Byron on piano, accordion and organ; Herb Deitelbaum on bass; Jay Nowac on drums; and John McDuffie on guitar, pedal steel and lap steel. As on Endless Sky and I Feel Like I’ve Got Snakes In My Head, Sometimes Jesse James was produced by Ira Ingber, who also adds some work on guitar, keys, percussion, bass, dulcimer, cittern and backing vocals.

The EP opens with “Down,” which begins with a cool Bo Diddley beat – a kind of “Who Do You Love” vibe – and then adds a Tom Petty-like pop sound, with some Byrds-like harmonies at moments. Yes, this song is an interesting and sometimes surprising combination of blues, pop and folk elements, with lyrics that hold a lot of appeal. “Come with me in the early morning light/Come with me and let fantasy take flight/Just leave your old life behind/Walk away and see what you find/Don’t let it drag you down, down, down.” That’s followed by “The Best Days Of Our Lives,” which has a sweeter folk sound, and is probably my favorite track. It’s a beautiful song, featuring a strong, moving vocal performance. “Then breathless in a quiet grove/And above, a bird’s soft cry/Oh, we lay down in the damp grass/On the best day of our lives/And the sun made diamonds that shone through the trees/As it danced across the sky/Oh, we knew it was late, but we didn’t care/On the best day of our lives.” I love how this music can make us feel what the two people in the song feel. There is something magical in that, isn’t there?

The EP’s only cover is “My Wrecking Ball,” a song written by Ryan Adams and originally included on his 2014 self-titled release. This is a good rendition, with more of a full folk sound than the original, and delivered at a somewhat quicker pace. That’s followed by “They Call It Love,” an interesting blues pop tune with a darker vibe. “My heart is wounded from poisoned darts/And they call it love.” “Born To Lose Blues” is also a blues tune, but with a catchy groove. This is the song that provides the EP with its title in the lines, “Sometimes I was a preacher/Sometimes Jesse James/Didn’t matter which I was/Things wound up the same.” There is also a cool instrumental section. “Yeah, I used up my second chance/My third and fourth and fifth/I was looking for a life vest/On a sinking ship/And I found you.” The EP then concludes with “Mi Sueño, Mi Dolor,” a pretty instrumental tune written by Steven Casper and John Groover McDuffie.

CD Track List
Sometimes Jesse James is scheduled to be released on February 9, 2018.
Posted by Michael Doherty at 6:46 PM