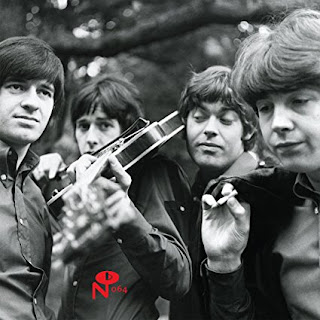 It’s that time of year when we need to figure out what sorts of things we should purchase for our loved ones. Because no matter how much the holidays irritate us, there is just no way to avoid them. For the music lover on your list (and if someone doesn’t love music, why is he or she on your list anyway?), an excellent choice is Action Painting, the two-disc career retrospective by The Creation. Particularly for people who are fans of early work by The Who and The Kinks, for a lot of this music has something of garage rock sound with a psychedelic edge. This set contains nearly two and a half hours of music, including some previously unreleased tracks. And it comes in a great package, the extensive liner notes presented in a hardcover book, contained in a strong outer case. The liner notes include the brief, but interesting history of the band (including the personnel changes – hey, Ronnie Wood was a member of this band at one point), as well as notes on the recording sessions, some promotional material and plenty of photos.

And if you think you don’t know this band, think again. As soon as the first track begins, you’re likely to recognize it, particularly as it was featured prominently in the film Rushmore (a phenomenal film, by the way, one you should check out if you’ve somehow missed it so far). Titled “Making Time,” this is a fantastic song, with a strong and memorable guitar part, and some really good lyrics. “Why do we have to carry on?/Always singing the same old song/Same old song/The same old song.” It might be the only song by this band that you already know, which is kind of insane, because everything on these discs is quite good. “Try And Stop Me,” the flip side to the “Making Time” single, has more of a bright pop vibe, and is kind of catchy. “You’re the kind of girl you see/Always hanging round/You hung around me much too long/I’ve got to bring you down, yeah/Try and stop me, understand/Try and stop me, if you can.” But it’s that guitar that I really love.

The band’s biggest hit was “Painter Man,” released in 1966. And the story of the band’s stage antics around this song, detailed in this release’s liner notes, is pretty wild. The first lines of this song make me smile: “Went to college, studied art/To be an artist, make a start.” These lines also make me smile, but for a different reason: “Tried cartoons and comic books/Dirty postcards, woman’s books/Here was where the money lay/Classic art has had its day.” This tune has a good thumping beat during the chorus, and a delightfully goofy and surprising “la la” section toward the end. It’s a bloody good song, from start to finish. Its flip side, “Biff, Bang, Pow,” is a seriously fun rock tune. All four of these songs were written by band members Kenny Pickett and Eddie Phillips.

“Sylvette” is an instrumental track released as part of an EP in France. Man, this music is hitting the spot. You know? This is raw, driving rock with rhythm and blues elements, music without worries or agendas, music that says life is pretty damn good, music that tells you “Fuck it and dance.” Best to give in and enjoy yourself, right? “If I Stay Too Long” has a more serious sound, a more serious feel, and is quite effective. This is actually one of my favorite tracks. “So if I stay too long, it’s ‘cause I need you/Hope that you won’t make me cry/Like you did the other night/People stopped and stared at me/As if I wasn’t right/If I stay too long, it’s ‘cause I want you.” And then I can’t help but love the “la la la la la la la” backing vocals in “Nightmares,” the single’s flip side. I’m guessing a lot of other folks are going to dig them too.

Things get a little more trippy with “Life Is Just Beginning” and “Through My Eyes.” Both of these songs are good, but I am partial to “Through My Eyes,” which has a heavy groove and a strange beauty, a sort of haunting vibe. These songs were written by Bob Garner and Eddie Phillips, as was “How Does It Feel To Feel,” another psychedelic bluesy gem, which interestingly came out of the band rehearsing Bob Dylan’s “Like A Rolling Stone” (a song the band included on its LP, We Are Paintermen). The writing of this song is discussed in the liner notes. This track features a cool, guitar-driven instrumental section. The first disc contains a second version of this song.

“Can I Join Your Band” is a wonderfully fun tune with a reference to “Eight Miles High.” It’s one of those songs about starting out with high hopes, and it also seems to encourage everyone to join in on some magical, totally thrilling journey. It will likely remind you of The Who. And how can you not love a song whose main line is “The girls are naked and they dance”? Yes, “The Girls Are Naked” is another fun one. I want to travel to the delightful world of this music, or pull it out of the speakers and make it live here, because so much of this music feels like celebration to me. “The Girls Are Naked” is followed by a cover of an early rock and roll number, Larry Williams’ “Bony Maronie” (here listed as “Bonie Maronie”). And it’s a really good rendition too.  I soon found myself dancing around to this track (much the way I danced around to a cassette of the original when I was a kid). The band jams on it toward the end. That’s followed by another cover – “Mercy Mercy Mercy.” The Creation also covers “Cool Jerk.”

British artists in the 1960s seemed to have odd uncles. For The Who, it was Uncle Ernie (in “Fiddle About”). For The Mindbenders, it was “Uncle Joe, The Ice Cream Man.” For David Bowie, it was “Uncle Arthur.” For The Creation, it’s “Uncle Bert,” a song written by Kim Gardner, Kenny Pickett and Ronnie Wood. “Three cheers for an old man coming ‘round/’Tis Uncle Bert with his trousers hanging down.” The first disc also includes “I Am The Walker,” a really cool song that was recorded in 1967, but not released until 1973 on a British compilation titled ’66-’67.

The second disc is interesting in that it both goes back to the band’s earliest recordings (or nearly the earliest), when the band was The Mark Four, and also contains the newest mixes of Creation songs, stereo mixes of tunes included on the first disc, but also some surprises. Missing are the band’s first two singles – covers of “Rock Around The Clock” and “Try It Baby.” In the liner notes, it is mentioned that these recordings weren’t all that great, but it still would have been cool to have them included. The first track is the band’s third single, “Hurt Me If You Will,” released in 1965. Though it’s the band’s third single, it’s the first to feature original material, written by Kenny Pickett and Eddie Phillips. “Hurt Me If You Will” is a good song, but I prefer its flip side, “I’m Leaving,” a cool blues rock jam, which might remind you a bit of some very early work by the Rolling Stones. “Work All Day (Sleep All Night)” has a delicious, raw sound. The last of the Mark Four songs included on this disc is “Going Down Fast,” which features the line “They’re going down fast because they’re going nowhere.” I like these early bluesy tunes, and “Going Down Fast” might be my favorite of the four.

The new stereo mixes begin with “How Does It Feel To Feel,” and this version includes just a bit of studio banter at the beginning, as do the versions of “Nightmares” and “Life Is Just Beginning.” I love the new mix of “Can I Join Your Band.” While most of these new stereo mixes are of songs included on the first disc, there are some exceptions. There is a cover of “Hey Joe,” a song that was included on We Are Paintermen. I really like the backing vocals in this version. They somehow give the tale an eerie emotional edge. There is also a short spoken word section. “Hey Joe” is followed by another cover – Dylan’s “Like A Rolling Stone,” which was also included on We Are Paintermen. The second disc concludes with some instrumental tracks, including backing tracks of “Making Time” and “How Does It Feel To Feel” (both of which were previously unreleased), plus the full-length version of “Sylvette” and a fun instrumental titled “Instrumental 1.”