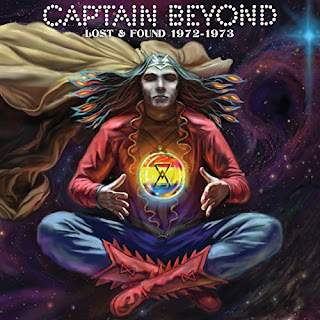 When Iron Butterfly broke up in 1971 (they would reform a few years later), two of that band’s members – bass player Lee Dorman and guitarist Larry “Rhino” Reinhardt – joined with Deep Purple’s original vocalist Rod Evans, Johnny Winter’s drummer Bobby Caldwell, and keyboardist Lewie Gold to form Captain Beyond (Gold would leave before the band’s first album was recorded). So, yes, there was a tremendous amount of solid rock talent going into this project, talent that was recognized by Duane Allman, who apparently championed the group and helped get them signed to Capricorn. Their first album was released in 1972. But there were some earlier recordings, the ones that Allman heard, and those have finally gotten a release. Titled Lost & Found 1972-1973, this CD includes early versions of tunes that would find their way onto the band’s self-titled debut (such as “Myopic Void” and “Raging River Of Fear”), as well as one that would later be on the band’s 1977 album and one that wasn’t released at all until this disc. Yes, some of this music is a bit goofy – the lyrics to “As The Moon Speaks” come to mind – but it’s also really cool material, with a bit of those trippy elements, and some serious ‘70s rock. I had several early 1970s hard rock compilations on cassette when I was a kid, and now I’m wondering why this band wasn’t included on them. Seems like a strange omission. The CD includes liner notes by Dave Thompson.

The CD opens with its previously unreleased track, “Uranus Highway,” a great rock number with a steady rhythm and some catchy guitar work. This is certainly one of the highlights. It’s followed by “I Can’t Feel Nothing (Part 1),” and this demo version comes on strong, just as the album version does. That short drum part seems to be without the added licks on bass that grace the album version, and so it has a rawer feel. The energy is excellent, with the feel of a concert performance. The beginning of “As The Moon Speaks (To The Waves Of The Sea)” has a somewhat different feel from that of the album version, and I actually prefer this demo version. I still think the spoken word lyrics are a bit silly (“Listen/Jump on a moonbeam and ride”), but the song really rocks after that section. The second part, “As The Moon Speaks (Return),” features some wonderful percussion. These songs flow right into one another, with the brief “Astral Lady” connecting them. And the song structures are anything but simple, with intriguing changes partway through.

“As The Moon Speaks (Return)” leads straight into “I Can’t Feel Nothing (Part 2),”which is another seriously rocking tune, an instrumental. That’s followed by “Icarus,” the track that reminds me most of Deep Purple. Interestingly, when the band included this tune on an album in 1977, Rod Evans was no longer the singer. He had left and been replaced by Willy Daffern. So this early rendition has a different sound. Also different is the following track, “Raging River Of Fear,” which packs a solid rock punch. “I won’t drown as she pulls you in/The raging river of fear.” “Dancing Madly Backwards (On A Sea Of Air)” reminds me a bit of Mountain at moments. “Wishing all your wishes/Landing on a star/Knowing you are planted here/Knowing that's so far/Dance, dance faster/Madly dance away.” Oh man, I want to madly dance away from the rotten stink of our country (it’s incredible just how wrong things have gone in only a year). The album concludes with “Myopic Void,” one of my personal favorites. There is something pretty about this one. “I no longer saw color/Only grey, only grey.” Then it kicks in, changes its pace, and refers back to “Dancing Madly Backwards (On A Sea Of Air).”