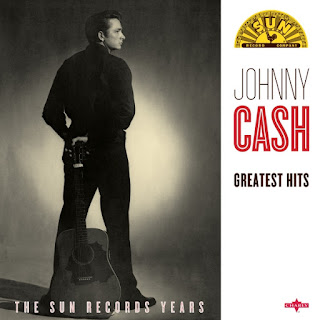 I love the renewed interest in vinyl. There is something both exciting and comforting in just holding a record, and in putting the needle in the groove. The new limited edition Johnny Cash record, Greatest Hits, made me happy before I even opened it. The back of the sleeve is designed with those old 1950s and 1960s records in mind, though the liner notes contained there are clearly current (mentioning, as they do, the film Walk The Line). The argument continues about whether the sound is better on CD or vinyl (I’ve heard some say that the best sound is actually on cassette). Maybe it’s psychological, but I love the sound of vinyl, particularly when it comes to an older release. I mean, it’s just sounds right with Johnny Cash, you know? After all, his is a raw, powerful country sound, and it’s kind of weird to listen to it as a digital download. On vinyl, it has a truer, more immediate feel. It’s the way it was meant to be. And the tracks on this record are newly remastered from the original Sun master tape reels, mastered at half-speed and sounding excellent.

Titled Greatest Hits, this record features some of his best early work, the stuff from those Sun Records years, all of these songs having been released as singles. It begins with one most people know, “Cry! Cry! Cry!” This song has some excellent lyrics, like these opening lines: “Everybody knows where you go when the sun goes down/I think you only live to see the lights of town/I wasted my time when I would try, try, try/When the lights have lost their glow, you’re going to cry, cry, cry.” It’s followed by one of his most famous songs, “Folsom Prison Blues,” which still works every time. “But I shot a man in Reno/Just to watch him die/When I hear that whistle blowing/I hang my head and cry.” And listen to his voice get low when he sings the line, “And that’s what tortures me.” Man, he just doesn’t hide anything, but gives it to you straight, and it’s all there in his vocal delivery. For me, that’s one of the keys to his great and continued appeal. Another of his most popular songs, “I Walk The Line,” is included (I always love that hum he delivers). The film Walk The Line turned a new audience onto this song, as well as several other Johnny Cash songs, including “Home Of The Blues,” which is also included on this record.

The Johnny Cash song I’ve probably heard the most is “Big River,” though as done by the Grateful Dead. The Dead turned me on to a lot of country and folk songs, and it was one of their recordings of this song that I first heard back in my early teens (it might have been the version released on Steal Your Face, but more likely it was a bootleg tape). But Johnny Cash’s original rendition, included here, has more attitude, and is bloody fantastic. “She loves you, big river, more than me.”

Though it’s a compilation of hits, some of these tunes might not be as well known to everyone, songs like “So Doggone Lonesome,” “Straight A’s In Love,” and “Katy Too.” But these are little gems too. I love what he does with his voice on certain lines of “So Doggone Lonesome,” a strange sort of love song. It’s almost like a little laugh, or slight quaver. “Well, I know I’ll keep on loving you ‘cause true love can’t be killed/I ought to get you off of my mind, but I guess I never will/I could have a dozen others, but I know I’d love you still/’Cause I get so doggone lonesome.” How is that for a declaration of love? One of my favorite tracks is “Train Of Love.” Like a lot of songs about trains, the music itself has the feel of a train moving along the tracks. But it is the vocal line and the lyrics which really make this one something special. Check out these lines: “Now stop your whistle blowing/’Cause I've got ways of knowing/You’re bringing other people's lovers/But my own keeps going/Train of love this evening/When she's not gone, she's leaving/Ever so often everybody's baby gets the urge to roam/But everybody's baby but mine's coming home.”

“Guess Things Happen That Way” is a ridiculously delightful song, in part because of those somewhat goofy backing vocals, and then the way Johnny Cash interacts with them. But it’s about carrying on after losing his woman, and features some wonderfully honest lyrics. You won’t find any answers here, and it’s because nobody has any answers. “Well, you ask me if I’ll forget my baby/I guess I will someday/I don’t like it but I guess things happen that way.” I love that pause he gives before the word “someday.” “You ask me if I’ll find another/I don’t know, I can’t say/I don’t like it, but I guess things happen that way.” “The Ways Of A Woman In Love” is another of his well-known hits and features some nice work on piano toward the end. I also like the piano part in “Thanks A Lot.” In “You’re The Nearest Thing To Heaven,” Johnny Cash sings, “I have searched for happiness so long and far/But my search for love was through/The day that I found you/Because you’re the nearest thing to heaven, yes you are.” That’s how I feel about my girlfriend, but if I said that to her, she would likely roll her eyes and tell me I was being mushy and corny. I don’t think anyone ever accused Johnny Cash of being corny.

Greatest Hits was released on November 3, 2017 through Charly Acquisitions.
Posted by Michael Doherty at 9:11 PM