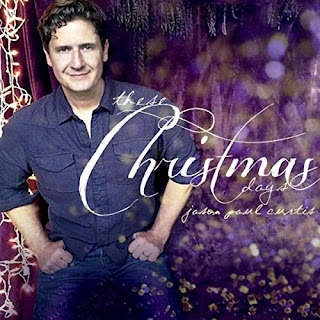 Vocalist and songwriter Jason Paul Curtis’ new release, These Christmas Days, is an unusual holiday album in that it contains mostly original material. In fact, there are only two covers, and those two are certainly not traditional Christmas fare. As Jason Paul Curtis sings in one of those covers, “Christmas is coming again.” Indeed, and there is not a damn thing we can do to stop it. So we might as well relax and try to enjoy it, and do that with some good music. The songs on These Christmas Days are largely about spending the holiday with loved ones, with Curtis creating scenes of a family enjoying the time. Two different bands back him on this album, Swing Shift and Swinglab, each performing on half of the tracks.

Jason Paul Curtis opens the CD with a cover – a fun rendition of “(Everybody’s Waitin’ For) The Man With The Bag,” a playful 1950s Christmas tune made popular by Kay Starr. This version has plenty of bright, joyous work on horns by the members of Swing Shift. And the excitement in Jason Paul Curtis’ voice almost makes me excited about the holiday myself, and that’s something. Will it be “the best and the merriest” December I’ve ever had, as is promised in the song? Probably not, as the love of my life is three thousand miles away. But with music like this, I think I’ll be able to enjoy it. That’s followed by “I’ll Feel Christmas,” the first of the original tunes. It’s a happy-sounding pop number with more nice work on horns by Swing Shift. “And I’ll feel Christmas long as you’re with me.” Ah, I miss my special someone, and even more when I hear lines like that.

I always love bass lines like the one in “Christmas Breakfast,” a bass line that seems able to smile. This song also features a nice instrumental section. The song is about opening presents, detailing some of the gifts the kids receive, the lyrics coming at you with the speed at which children open gifts. I’m wondering what the guy is going to do with that new spatula. After all, he’s pretty damn excited about it, much more so than he would be about making actual breakfast. Sorry, my thoughts can’t stay innocent for too long. That’s followed by “December Again,” a song from a father to his child, marking the child’s growth by the passing Decembers. It starts in 2004, when we all received a great gift in the form of a Red Sox World Series championship. Swinglab backs Curtis on this track, with some good work on guitar by John Albertson during a lightly swinging instrumental section. Dave Schiff joins the group on flute, delivering some delightful stuff in that same section. Toward the end of the song, Isabella Curtis joins Jason Paul Curtis on vocals, in the role of his daughter, a role she has in real life as well. She also joins him on the following track, “I Want Snow,” a somewhat playful duet. “I won’t spend Christmas without you/So let’s just drive ‘til you make up your mind/Either way, I want snow Christmastime.” I really like the work on keys by Jeremy Ragsdale on this track. Dave Schiff switches to clarinet for this one.

“These Christmas Days,” the album’s title track, is a mellow, somewhat cheesy number about the family being together on Christmas. This one doesn’t really do much for me (though I do appreciate the nod to A Charlie Brown Christmas), but it’s followed by what is perhaps the album’s best track, “Came Winter.” This one is not about a family gathering to open presents or anything like that. Rather, it’s about a relationship that ended in December. “Now you say you miss me and you wish that we could still be friends/How can I believe you when it’s Christmas Eve, let’s not pretend/I know that you’re lonely ’cause the only time you’re calling me/Midnight, the dead of winter, just a year from when you set me free.” It features a great groove, and some wonderful work on horns. It also contains what for me is the best vocal performance of the album. I completely love the vocal line to this song, Jason Paul Curtis’ delivery. “August was hot/September was not/October so fraught/November the plot/Came winter, you threw my heart away.” This is an excellent song.

While “Came Winter” is about a relationship that ended a year ago, the following track, “Christmas Clear,” celebrates a relationship that started a year ago at a holiday store. Hmm, the guy has a bit of a thing for those Santa dresses. It must be the white fur trim, or maybe it had a low cut. Either way, the relationship got off to a start because of it, as he repeats, “I love the way you wore your Santa dress so festively.” The song’s title is a play on the phrase “crystal clear.” I really like the instrumental section, which features some nice work by Ray Mabalot on piano. Then “New Year’s Vacation” is about getting away from the world for a bit. “All year long we work with good intention/So tonight I’m going to give you my complete attention/Let’s toast, dear/To good conversation/We’ll host, dear/Our own celebration/Just coast here/A New Year’s vacation with you.” The album began with one of its two covers, and it ends with the other cover – a pretty, romantic rendition of “The Way You Look Tonight,” written by Jerome Kern and Dorothy Fields. I’ve always loved this song, and Jason Paul Curtis does a good job with it. “Some day, when I'm awfully low/And the world is cold/I will feel a glow just thinking of you/And the way you look tonight.” Ah, yes.

CD Track List
These Christmas Days was released on November 24, 2017.
Posted by Michael Doherty at 12:43 PM