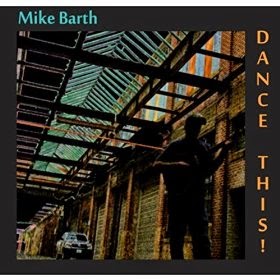 You most likely know Mike Barth as a member of The Polkats, and on his new solo album, Dance This!, he includes a couple of tunes that were also featured on the most recent Polkats disc, last year’s Live From Highlandtown. Fellow Polkats band members Paul Margolis, John Shock and Steve Raskin join him on this release. Mike Barth also plays and records with The Stone Hill All-Stars (you can hear him on Away, their latest CD), and members of that band also join him on this release, which features mostly original material. Mike Barth draws inspiration from a wide range of musical areas, and the songs on this disc delve into pop, country, folk, even reggae. And though he has some excellent guest musicians and vocalists on this release, Mike Barth plays most of the instruments himself, including acoustic guitar, slide guitar, bass, keyboard, harmonica, drums, and glockenspiel.

Dance This! opens with “Just Can’t Make It Alone,” a really good and fun pop rock number that reminds me at moments of The Beatles’ “Drive My Car.” Plus, I totally dig lines like, “A simpleton on a holiday/What’s it take to find your way?” This is a strong opening track. Mike Barth follows it with “Blanket Of Misery,” which has more of a country vibe. I love this song immediately, even before its delightful opening lines, “Well, she’s so unhappy/She’s made me mean and nasty/She’s got nothing but troubles, everything under the sun/She’s making me screwy.” There’s a wonderful, slightly twisted humor to this song, and its title line is “She’s got me wrapped up tight in a blanket of misery.” And I love the way the harmonica is used as a lead instrument. Plus, John Shock plays accordion on this track, and Paul Margolis is on guitar. “Blanket Of Misery” was also included on the Polkats’ 2014 release, Live From Highlandtown. Joe McCarthy plays drums on both of these first two tracks.

Mike Barth then moves to more of a reggae feel for “Energy Called Love.” This one has a positive, kind of bouncy vibe, and while the title might seem a bit cheesy, the song includes some good lyrics. Here is a taste: “I need protection from the sun/And you might be the only one/To take the heat I generate/If I were you, I couldn’t take/The complications I provide.” Steve Raskin provides some wonderful work on drums and percussion on this track.

“Big Piece Of Chicken” is a playful country tune, and it features Linda Nelson on vocals: “Took a bubble bath and washed my head/Since you’ve been gone, it’s got me itchin’/Working my heart out in the kitchen.” It’s definitely on the silly side, but it makes me smile each time I listen to it, and I think it would be a fun one to see in concert. And then “Ring In My Pocket” has a pretty folk vibe, which I really like. Check out these lines: “You reached out and you gave me some loving/You gave me some luck and a dollar or two/I broke down and I showed you my problems/All of my problems.” Paul Margolis plays guitar on this track.

“The OWS And Me” is an excellent, lively folk tune, and it's a whole lot of fun. This track features Paul Margolis on guitar, Dave Jacobson on guitar, and John Shock on accordion. Here is a taste of the lyrics: “I can't afford to pay my doctor bills/The children keep asking why/It breaks my heart to tell my kids that the American dream's run dry.” And of course I appreciate these lines: “I see a police camera everywhere I look/Where did my freedom go?”

“Words Of Love” is one of the album’s two tracks not written by Mike Barth, and the vocal approach here is close to the way Buddy Holly sang it on the original recording. It’s a good, sweet rendition. The other tune that Mike Barth did not write is “A Thousand Times,” which was written by Polkats member John Shock and included on Live From Highlandtown. Interestingly, John Shock does not play on this track. Mike Barth delivers this tune as a pretty, earnest folk song, and it's one of my favorite tracks.