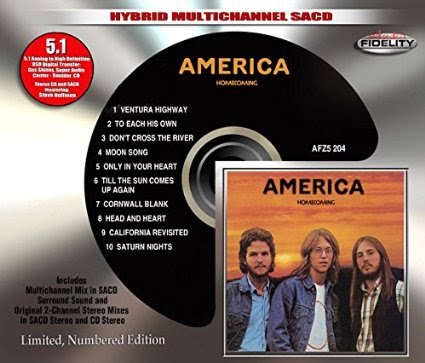 America is still probably best known for the hit single “A Horse With No Name,” which was also included on reprints of the band’s first album. But it was the band’s second LP, Homecoming, that included such popular tunes as “Ventura Highway” and “Don’t Cross The River.” Originally released in 1972, this album is now being issued on hybrid multichannel SACD, in a limited, numbered edition. (I’m not sure how many copies were made, but my copy is number 1062, so there are at least that many out there.) This album features mostly original material, with all but one song written by the band’s three members – Dewey Bunnell, Dan Peek and Gerry Beckley. They’re joined by some excellent musicians on this release, including Joe Osborn on bass and Hal Blaine on drums (you’ll know Hal Blaine from his session work on Monkees recordings, among others). Three of the songs from this album were released as singles, but the entire album is really strong, and this multichannel edition sounds great. Check out that fantastic instrumental section of “Moon Song” for a taste of the group’s musical talent.

The album opens with “Ventura Highway,” which was also released as a single and was a top ten hit. It’s a really good song, though not my favorite on this album. There is one line that I always found questionable: “Alligator lizards in the air, in the air.” But I love lines like “Some people say this town don't look good in snow/You don't care, I know” and “Where the days are longer/The nights are stronger than moonshine.” And, long before Prince would use the phrase, this song mentions “purple rain.” “Ventura Highway” was written by Dewey Bunnell.

It’s followed by the sweet and pretty “To Each His Own,” written by Gerry Beckley and featuring some soft and moving work on piano. Here is a taste of the lyrics: “Familiar faces that I've seen/Turning red and turning green/They just got caught with writing on their sleeve/I guess I'll leave/I'm gonna miss you, yes, I will/No matter who you are, I'll love you still/Will you cancel my papers and lock the door/’Cause I ain't gonna be 'round no more.” This is one of my favorite tracks.

Another favorite is “Don’t Cross The River,” which was a top forty hit for the group. It’s a fun folk tune written by Dan Peek, with lines like “If you want, you can ride my train/And soon forget the reason that you're leaving/Lose yourself and then some time/Maybe even save yourself some grieving.” This track features Henry Diltz on banjo. “Only In Your Heart” was also released a single, though only reaching #62 on the U.S. chart. It was written by Gerry Beckley, and has a catchy rhythm.

“Head And Heart” is the album’s only cover, written by John Martyn and originally released on his 1971 LP, Bless The Weather. America’s version is a bit shorter than the original, but is largely faithful to the feel and style of Martyn’s version, though with keyboard prominent in the instrumental sections. Gerry Beckley plays bass on this version, and Dewey Bunnell is on percussion.

“California Revisited” is an interesting and oddly catchy number. Check out these lines: “On your waters I see a strange reflection/Rumor has it I'll see you when I die/Everyone I meet is from California.” It was written by Dan Peek. The album then concludes with “Saturn Nights,” also written by Dan Peek.

CD Track List
This special limited edition of Homecoming was released on April 21, 2015 through Audio Fidelity and Rhino Entertainment Company.
Posted by Michael Doherty at 12:22 PM