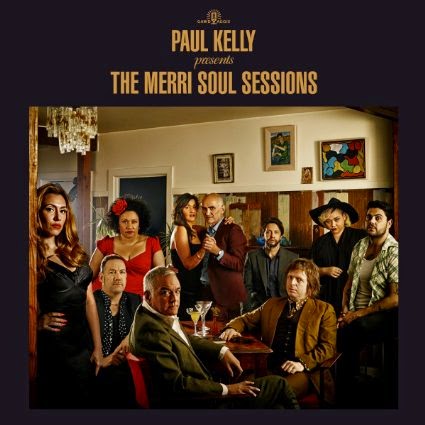 I never know quite what to expect from Paul Kelly, except I can count on whatever he does to be really good. He’s such a talented songwriter that he can explore all sorts of territory and come out with excellent material. His 2012 release, Spring And Fall, an album of love songs, ended up on my list of favorite CDs of that year. On his newest album, The Merri Soul Sessions, he is joined by a number of vocalists to help him tackle mostly new material (and one classic tune, “Sweet Guy”), giving this album a very different feel from previous releases. Plus, a lot of this material, though new, has a classic feel, which is totally delicious. Singers joining him on this release include Linda Bull, Vika Bull, Clairy Browne, Dan Sultan and Kira Puru.

The album opens with “Smells Like Rain,” featuring Linda Bull on vocals. Linda is one half of the Australian vocal duo Vika And Linda (both of whom are on this CD). I love the mood of this song, with its slow, deliberate, seductive groove, and Linda’s vocals rising above it and sometimes winding around it. This song was written by Paul Kelly, Dan Sultan and Kev Carmody. Check out these lines: “Dark electric sky/Thunder from the west/Oh, my man’s got a hard head/He plays it close to his chest.”

That song is followed by “What You Want,” this one featuring Vika Bull (Linda’s sister and the other half of Vika And Linda). “What You Want,” written by Paul Kelly and Dan Sultan, has a great early 1960s feel, right from the beginning with the way the title line is sung, a delightful surprise the first time I listened to this album. And Vika’s vocals are just wonderful. Here is a taste of the lyrics: “Oh, don’t deny me, boy/You don’t know what it is you need/You don’t show it but I know it’s/What you want.” This is one of my personal favorites.

Vika Bull also joins Paul Kelly on “Sweet Guy,” the one older tune on this CD. It was originally on Kelly’s So Much Water So Close To Home, and also included on the 2011 compilation Greatest Hits: Songs From The South Volumes 1 & 2. And Vika delivers another excellent vocal performance on this one, and you really believe her when she sings “It’s become my problem,” and know she’s experienced something when she asks, “What makes such a sweet guy turn so mean?” Also, I dig the work on keys toward the end.

Both Vika and Linda Bull sing on “Down On The Jetty,” a song written by Paul Kelly and Linda Bull. Their vocals sound so pretty together, making this track one of the CD’s highlights for me. Plus, I just love the tone of this song, led by some wonderful work on acoustic guitar.

Clairy Browne joins Paul Kelly for “Keep On Coming Back For More.” Clairy Browne is known for fronting Clairy Browne & The Bangin’ Rackettes, a band from Melbourne that has a great early rock and R& feel. “Keep On Coming Back For More” has a cool, heavy rhythm and features a strong, kick-ass vocal performance by Clairy Browne. “All my friends keep shaking their heads/You don’t care for me, you never did/I’m so tangled up inside of your spell/And the gates of heaven now, baby, lead straight to hell/So I, I, I, I, I keep on coming back for more.” Dan Kelly plays lead guitar on this track. Clairy Browne also sings lead on “Where Were You When I Needed You,” turning in a beautiful and emotional performance.

Dan Sultan takes lead vocal duties on “Don’t Let  A Good Thing Go,” a tune written by Paul Kelly and Bill Miller, and having a wonderful soul groove. “You don’t want to be tied down/You’ll wake up on stony ground/And all you know in pieces around/Now there’s just one thing you should know/Don’t let a good thing go.” Kira Puru, lead singer of Kira Puru & The Bruise, sings lead on “I Don’t Know What I’d Do,” a haunting track. You can really hear the desperation, uncertainty and doom in her voice when she sings, “I don’t know what I’d do/If we were parted/I don’t know what I’d do/If you were gone.”

And if you were concerned that you wouldn’t get to hear Paul Kelly’s own voice on this album, don’t worry. He sings lead on “Righteous Woman” and “Thank You,” and shares vocals duties with Vika and Linda Bull on “Hasn’t It Rained.” I really like these lines from “Righteous Woman”: “Righteous woman, laying down the law, getting on a glow/Righteous woman, surrendering to the full, ecstatic flow/Now she looks out and sees the brass buttons glinting in the tenth row.” And “Thank You” is actually my favorite track on the CD. It’s so sweet, so beautiful, so moving. Here is a taste of the lyrics: “Sometimes I feel so mean and ugly/I want to hurt what’s close to me/The cruel things I’ve said and done/You never took them personally/Thank you for loving me.” I love this song.

The album closes with “Hasn’t It Rained,” a good and uplifting gospel song credited to the entire band, and featuring Paul Kelly, Vika Bull and Linda Bull on vocals.

CD Track List
The band for these tracks is Paul Kelly on rhythm guitar, Ashley Naylor on lead guitar, Cameron Bruce on keyboards, Bill McDonald on bass, and Peter Luscombe on drums and percussion. By the way, in the liner notes, Paul Kelly talks a bit about how this album was put together. The Merri Soul Sessions was released on January 27, 2015.
Posted by Michael Doherty at 12:12 PM