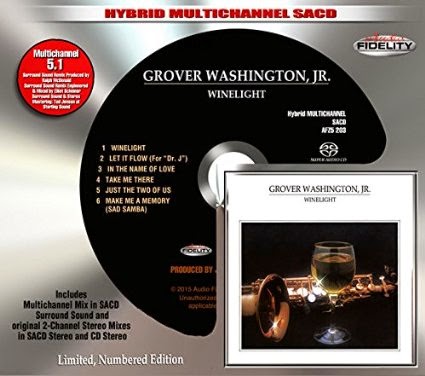 Grover Washington, Jr. is considered one of the creators of smooth jazz, and his 1980 release Winelight remains one of his most popular records, due in large part to “Just The Two Of Us,” which reached #2 on the Billboard Hot 100 and won a Grammy Award. Now Audio Fidelity, along with Elektra Entertainment Group and Rhino Entertainment Company, has released a special hybrid multichannel SACD version. This is the first CD version of this album I’ve owned. All of my Grover Washington, Jr. albums up to this point have been on vinyl. This limited, numbered edition sounds fantastic. (By the way, I don’t know how many were made, but my copy is number 1478, so there are at least that many in existence.)

Winelight kicks off with its title track, a cool, kind of mellow, relaxed instrumental track with a bit of a funky vibe to keep things interesting. And that’s Steve Gadd on drums. I’ve always respected his work. “Winelight” was written by William Eaton, and was released as a single. It’s followed by “Let It Flow,” and this too has a sort of laid-back funk thing happening at the start. But this one certainly has more of a late-night feel, like you should have a glass of wine while listening to it (just take a look at the album cover to get an idea of the feel). Things get groovier a couple of minutes in, when the bass takes on a bit more prominence (that’s Marcus Miller on bass on this album), and Grover Washington, Jr. lets loose on the saxophone. I definitely prefer the livelier sections of this track. “Let If Flow” was written by Grover Washington, Jr.

“In The Name Of Love” is fairly mellow, but has kind of a happy vibe. It’s a good tune, but I prefer the following track, “Take Me There.” It has a nice groove, with some sweet, smooth playing by Grover Washington, Jr. (who also composed this tune). The rhythm asserts itself partway through, which gets Washington even more energized, and the song builds and builds beautifully, for some of the most exciting playing on the album. The tune then relaxes back into that good groove.

“Just The Two Of Us” is the album’s big hit, written by Bill Withers, William Salter and Ralph MacDonald. This is the only track on the album to feature vocals, which are provided by co-writer Bill Withers. Here is a taste of the lyrics: “We look for love, no time for tears/Wasted water’s all that is/And it don't make no flowers grow/Good things might come to those who wait/But not for those who wait too late/We got to go for all we know/Just the two of us, we can make it if we try.” This song totally holds up, and at seven and a half minutes, there is plenty of good playing.

The album then concludes with “Make Me A Memory (Sad Samba),”a mellow, laid-back tune written by Grover Washington, Jr. It gets more interesting when Washington has that great, extended lead spot. Otherwise, it feels more like background music.

CD Track List
This special limited edition of Winelight was released on March 10, 2015 through Audio Fidelity.