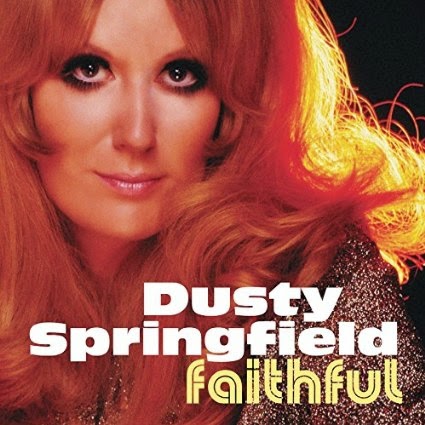 In early 1971, Dusty Springfield recorded tracks for an album which until now was not released. Produced by Jeff Barry, who also has a couple of writing credits on this album, Faithful features Dusty’s wonderful vocal talents. Two singles were released, but did not chart. The album was intended to be released on Atlantic Records, but after the singles failed to do well, and after Dusty signed with a new manager and then a new label, Faithful was shelved. Now Real Gone Music is putting out the album as it was intended, along with one bonus track, “Nothing Is Forever,” which was the flip side of one of the singles. This CD includes liner notes by Joe Marchese, along with a few photos.

The album opens with the sweet and beautiful “I’ll Be Faithful,” written by Ned W. Albright, Michael F. Soles and Steve Soles. Here is a taste of the lyrics: “Now I would be your music if you would like a song/I would sleep beside you when the winter’s cold and long.” This song has a nice groove, and is one of those tunes that make you feel good. Dusty’s vocals have more of a vulnerable edge at the beginning of the following track, “Live Here With You.” There is something youthful and innocent in her tone as she sings, “You ask me to live here with you/f I could, love, you know I would/I can't give you my heart or my hand, though you want it/I can't give you the love I know I should/And I tell you there’s nobody else/It’s not you, I’m just afraid.” “Live Here With You” was written by Gilbert Slavin and Michael F. Soles, who also wrote the album’s closing track, the excellent and powerful “I Found My Way Through The Darkness.”

“Haunted” is one of the tracks that was released as a single (with “Nothing Is Forever” as its flip side). It’s also a track co-written by Jeff Barry, along with Bobby Bloom (those two also wrote the hit “Montego Bay”). It’s easy to understand why it was chosen as a single, and not as easy to understand why it didn’t do well. There is something very cool about this song, which finds Dusty haunted by the memory of a man. It opens, “I can't eat right/I can't sleep nights/Oh, honey look at what you've done to me/Life is nowhere/And it's no fair/'Cause you've got me by the memory.” And I love those backing vocals occasionally singing, “Haunted.”

Jeff Barry also wrote “I Believe In You,” the other song from these tracks that was released as a single, and one of my personal favorites. There is something sexy and soulful about this tune. And it features a powerful and delicious vocal performance by Dusty. “It's gone way beyond just lovin'/And for a long time now/It's been more than just a thrill/Oh, honey, I, I believe in you.”

Songwriter Neil Goldberg provides several of the tunes on this album, including “Natchez Trace,” which he co-wrote with Gilbert Slavin. This track finds Dusty giving a ballsy vocal performance. Here is a taste of the lyrics: “And I had his child in Memphis/And we watched him ride away/And now you know what a girl like me is doing here today/I'm sorry mister, you can't stay/Hungry together, racing the weather/Into the Natchez Trace.” There is also a cool, though brief instrumental section, helping to make this another of my favorites.

Dusty Springfield delivers a good cover of Bread’s “Make It With You,” a song written by David Gates. This song was relatively new at the time of this recording, Bread’s version having come out only the year before. There is something easily seductive about Dusty’s breathy rendition. And the way she ends the song lets you know she is ready and eager. She also covers Carole King’s “You’ve Got A Friend,” which was most famously done by James Taylor. Both King’s and Taylor’s versions were released in 1971, the same year that Faithful was intended to be issued. I really like Dusty Springfield’s take on this song.

The bonus track is “Nothing Is Forever,” which was released as the flip side to “Haunted.” Like “Haunted,” this song was written by Jeff Barry and Bobby Bloom. This one has an older feel. “Nothing is forever/Always is a dream/Life goes by so fast/You try to make it last/The future turns to past/And summer turns to snow.”

CD Track List
Faithful is scheduled to be released on April 28, 2015 through Real Gone Music.
Posted by Michael Doherty at 12:25 AM