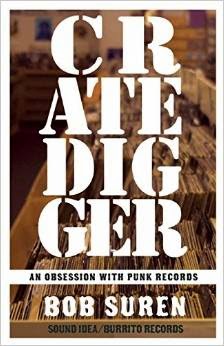 Music is very personal to me, as it is to many people. As it most certainly is to author Bob Suren, who shares his personal connections to various bands and albums in his new book, Crate Digger: An Obsession With Punk Records. This book is not just for fans of punk, but music fans in general, particularly those of us with the collector gene as part of our psychological makeup. The book will likely make you think of your own collections and connections, and lead you to revisit some of those moments of your own life. Plus, you might learn a thing or two about certain records and bands (there are several bands mentioned in these pages that I hadn’t heard of before, but now am curious about). Crate Digger also includes lots of black and white photos.

Bob Suren grew up in a small town in Florida, and the time and place certainly had an effect on his connection to music. “The music circulated slower then. It was harder to find and people appreciated it more. Scoring a great record was cause for celebration and that great record inevitably was dubbed for everyone in the crowd” (p. 100). He tells a humorous anecdote about a hitchhiker that he thought was a fellow punk rocker turning out to be a homeless guy. “Back then, especially in a small town, punk rockers were uncommon. If you saw someone in a band T-shirt, you had a secret connection” (p. 22). But the T-shirt the man was wearing turned out not to be a Bad Brains shirt after all. Bob gave him a ride anyway, shared his pizza, and turned the guy on to Bad Brains. I ended up reading this section aloud to my girlfriend. It’s that kind of book.

In addition to being a music fan, Bob Suren has been a band member, and includes anecdotes of his adventures, like when his band was caught in a sudden downpour and their van’s windshield wipers stopped functioning. “We lost visibility in one second and clearly we were going to die. Brian R., who was riding shotgun, let out an ape-like yell and punched the dashboard. The wipers came back on. It was a punk rock miracle” (pages 10-11). One of my favorite stories is that of him wanting to put his own band on vinyl, and how it led to his own record label, Burrito Records, and a relationship with Jello Biafra of the Dead Kennedys.

Bob Suren has also been a record store manager, as well as a record label owner. And for those of us who dreamed of owning a record store, there are lots of cool anecdotes regarding his store. (Fans of High Fidelity should dig those passages as well.) He also became involved in internet radio in 2011. “Internet broadcasting reminded me of all the mix tapes my friends and I traded. The idea was the same: Spread the music around” (p. 89). This book got me thinking about all the mix tapes I’ve made over the years (many of which are still in my possession), and how each of those tapes tells its own story.

This book doesn’t proceed chronologically, but feels more like the order of memory, with one story reminding him of another. It’s not all positive. He talks about damaging his hearing. He also talks about his separation from his wife. I find the stuff about music far more interesting than the stuff about various women he’s been interested in the last couple of years, and fortunately the music makes up the bulk of the book.

At one point Bob Suren relates how his mother once told him, regarding punk: “You’re a nice boy, Bobby. I hope this music doesn’t change you.” He then tells us: “Of course, the music did change me. I think it made me a better, stronger, funnier, and more critical person and it has given me some of the greatest moments of my life. And I still think I am a nice boy” (p. 111).

Crate Digger: An Obsession With Punk Records is scheduled to be published June 9, 2015 through Microcosm Publishing.
Posted by Michael Doherty at 11:22 PM