Grateful Dead Meet-Up At The Movies, 2015 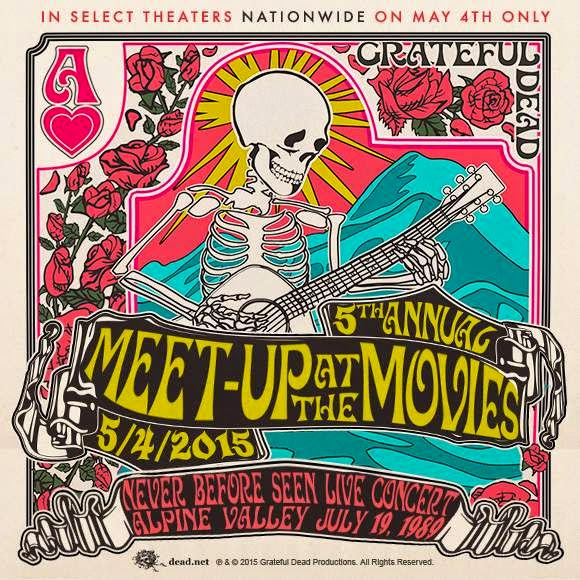 This year’s Grateful Dead Meet-Up At The Movies features a show from their summer 1989 tour, this one from July 19th at Alpine Valley. Several shows from this tour have been released on CD, DVD, and in theatres. In 2012, for the second official Meet-Up At The Movies, they showed the previous night’s show, also at Alpine Valley. And though it wasn’t part of the Meet-Up At The Movies series, they did play another show from that summer 1989 tour in the movie theatres – the July 7th show in Philadelphia, which became titled Crimson, White And Indigo. And much earlier than that, the July 4th show was released on DVD and CD as Truckin’ Up To Buffalo. With all of these summer 1989 concerts being shown, I can’t help but wonder when the July 2nd show at Foxboro will come out. That was the only show I caught that summer, and I’d love to revisit it. My memory has it as one hell of a good show, with “Playing In The Band” into “Crazy Fingers” to open the first set. I also remember a glider overhead during “To Lay Me Down,” dipping its wings in time with the music.

Well, the July 19, 1989 concert will be shown in theatres on just one night, May 4, 2015, at 7:00 p.m. Check your local theatres to find one screening it. You can purchase tickets online through Fathom Events.
Posted by Michael Doherty at 11:33 AM