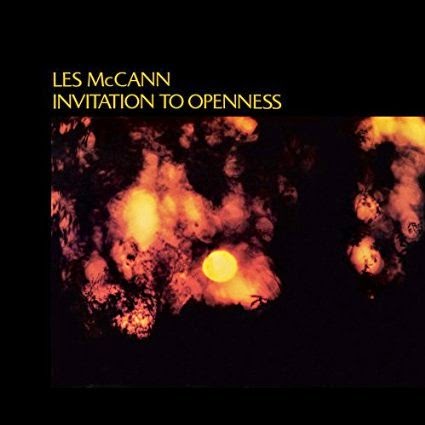 Les McCann’s Invitation To Openness is an incredible album, featuring a 26-minute improvised track. Originally released in 1972, the album has now been issued on CD by Omnivore Recordings. This new issue includes a bonus track – a live version of “Compared To What” recorded in Germany in 1975, featuring Buddy Guy on guitar – as well as new liner notes by Peter Relic, which include material from his interviews with band members. There are also liner notes by Les McCann, Joel Dorn, Ron Neal and Pat Thomas. This re-issue was produced by Pat Thomas.

The album opens with “The Lovers,” a 26-minute tune that took up the entire first side of the record when it was originally released. It takes me a little time to get into this one, as it opens tentatively, sort of eerily, dreamily. But this is a track that slowly puts its hooks into you, and before you know it, you’re caught up in it, curious and excited to see where it will take you. And it really starts to get interesting around the five-minute mark, when you feel you’re on some sort of Egyptian spaceship. It’s beautiful and fun and groovy and just fucking fantastic. A great jam, which just gets better and better. Check out that wild stuff on guitar around the eleven-minute mark. The song relaxes a bit for a while, but then builds against toward the end with a great groove.

The second side of the original record opened with “Beaux J. Poo Boo,” a tune that wasn’t new. In fact, it had been the title track for a 1965 Les McCann album. That version was quite a bit shorter than the rendition included on this album. While I do really like that earlier version, with McCann on piano, I think I actually prefer this version, with McCann on keyboard and with Yusaf Lateef on flute. There is a lot of energy, and a groove that keeps me smiling and feeling oh-so-good, with a few nice little touches of madness.

The original album then concluded with “Poo Pye McGoochie (And His Friends),” which begins quietly, and then suddenly kicks in with a great soulful groove that might get you dancing. There are intriguing breaks in the tune, first for an interesting bass solo, with a few touches on keys and drums, and then later for a little conversation between sax and guitar. After each, the song kicks in again with a delicious force. And then near the end, there is a very cool drum solo. I absolutely love this track.

This re-issue includes a bonus track, a live version of “Compared To What,” a song written by Gene McDaniels and included on Les McCann’s Swiss Movement. The version here is from a show in Germany in 1975, and was previously released on Doldinger Jubilee ’75. It’s an excellent, lively rendition, and is the only track on this CD with vocals. “Compared To What” has also been recorded by Roberta Flack and Ray Charles, among many others.

CD Track List
This special issue of Invitation To Openness was released on March 3, 2015 through Omnivore Recordings.
Posted by Michael Doherty at 4:32 PM