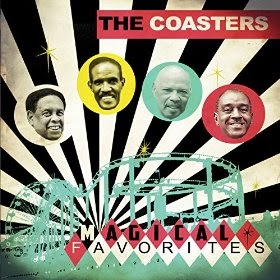 The Coasters recorded and released some of the best music of the late 1950s, including such well-known and loved songs as “Young Blood,” “Yakety Yak,” “Charlie Brown,” “Searchin’” and “Poison Ivy.” Fantastic records, all. The band was inducted into the Rock And Roll Hall Of Fame in 1987, but sadly, none of those inducted band members are still alive (the only original member of the band still living is Leon Hughes). Magical Favorites, a new album from The Coasters, was recently released, but there are no original members on it. In fact, a sticker on the CD case hails this as the band’s first studio album in thirty-five years, and none of the members on it were even in the band at the time of that last release. So this is really a whole new band. Also, the songs are all covers. So I do have to wonder what exactly the point of this release is.

That being said, these are good songs, songs you most likely already know and love, most of them in the oldies but goodies category. And these members, though not original Coasters, can certainly sing, and do decent renditions of these tunes. The CD opens with “All I Have To Do Is Dream,” the most familiar version of which is that by The Everly Brothers. They follow that with “Cool Jerk” and then “Don’t Be Cruel.”

The first surprise on this release is “If I Had A Hammer,” as it’s a track that this group does something a bit different with. They take Pete Seeger’s folk tune, and give it a kind of early 1960s doo-wop feel, with a bit of a gospel thing as well. They add a groovy “Yeah, oh yeah/I said yeah, oh yeah” section between verses. This is definitely different, and it works.

The group dips into the 1970s with their covers of The Temptations’ “Just My Imagination (Running Away With Me)” (the original version of which was released in 1971), Jim Croce’s “Bad, Bad Leroy Brown,” and The Eagles’ “Lyin’ Eyes.” They do a really fun rendition of “Bad, Bad Leroy Brown,” doing the later verses with a sort of spoken word delivery which is wonderful. This track is, for me, one of the CD’s highlights. I could, however, do without “Lyin’ Eyes,” but then again I just can’t stand The Eagles. Another surprise on this album is also from the 1970s, Barry White’s “Can’t Get Enough Of Your Love, Babe,” the original version of which was released in 1974.

They do a cover of “Shout,” and what I really like about their version is the way they do that middle section. They leave out the “Yeah, yeah” bit and include just the organ accompanying the vocals, giving the song more of gospel vibe at that moment, like the man is preaching the gospel of feeling-good-with-your-woman. Amen. I do wish they’d left out the water sounds at the beginning and end of “(Sittin’ On) The Dock Of The Bay.” I know there were wave sounds on the original, but it doesn’t seem necessary or desirable to duplicate that.

They do a couple of Sam Cooke numbers – “You Send Me” and “Twistin’ The Night Away.” I love Sam Cooke, and they do a good job with these songs, particularly with “Twistin’ The Night Away,” which they seem to be having fun with. And they end the album with a really good, sweet rendition of “Dream Baby (How Long Must I Dream),” a song first recorded by Roy Orbison.

CD Track List
Magical Favorites was released on March 31, 2015 through Stardust Records, a subsidiary of Cleopatra Records. The Coasters on this release are Dennis Anderson, Joe Lance Williams, Primotivo Candelaria and Edward Whitfield. Joining them are Jurgen Engler on guitar, bass and keyboards (Engler also produced the album); and Chris Lietz on keyboards and drums (Lietz also mix engineered the CD).
Posted by Michael Doherty at 2:45 PM