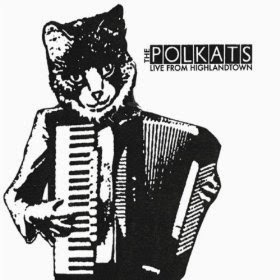 The Polkats formed in 1988, playing traditional polkas and original material. They released two albums in the early 1990s, were named “Best Unsigned Band In America” after a contest sponsored by Musician Magazine, and then broke up in 1995. On March 3, 2012, the band played a reunion concert at The Creative Alliance in Baltimore. Live From Highlandtown is a recording of that show.

This CD features kind of a wild selection of music, combining traditional polkas, folk, country, rock, and some blues. I admit: I love the accordion. (One of the best bands I ever saw in concert was Josh Lederman Y Los Diablos, and certainly a big part of the attraction was John Buczkowski on accordion.) And there are plenty of instrumental tracks on this CD to feature the accordion, including a waltz. But for those who are not such big fans of that instrument, don’t worry, there is plenty else here to please you. (However, if you hate that instrument, you’re kind of shit out of luck here. Give it a listen anyway; this CD might change your mind.)

You know it’s going to be something special when a live CD opens with someone saying, “We’re going to start with a polka.” And no, I’m not being sarcastic. Of course, with a name like The Polkats, it should come as no surprise that they’d open with a polka. And while “La Norteñita” is led by accordion, there is the addition of an electric guitar providing a rock edge to this instrumental tune.

The Polkats follow that with another instrumental, “Mi Cafetal.” Again, it’s led by accordion, but with the guitar bringing the song just a bit closer to rock and roll. Just a bit.

Things start to get cooking with “Columbus Stockade,” a song written and originally performed by Darby And Tarlton in the 1920s (then titled “Columbus Stockade Blues”). This track features some great bluegrass/country vocals, as well as some cool work on harmonica by Tom Chalkley. This is one to get folks up and dancing, and includes a good little jam.  “Well, you can go and leave me if you want to/Never let me cross your mind/If in your heart you love another.”

“Blanket Of Misery,” a tune written by Mike Barth, features a good groove and nice little hooks on guitar. “She hates my drinking/But if she knew what I was thinking...”

“Flor Marchita” is a kick-ass instrumental tune mixing tradition fare with an attitude and a delightful energy, and is one of my favorite tracks. This one was written by Narciso Martinez.

“Song From Jail” is more of a folk tune, this one written by Paul Margolis. It’s a thoughtful song, with a relaxed vibe, and lines like, “I could see the time slipping through my closed hands” and “I stop and stare and hope there’s more out there/But I can’t cry anymore.” And I particularly like this line: “I’m not the man I thought I’d be, but I’m not the man I was.” Nice, eh? Also, this track features Lou Shach on harmonica.

“Catwalk” is a very cool instrumental track with jazzy elements. Mixing accordion and saxophone works so well, with wonderful results. And then the pace suddenly picks up, something I’m kind of a sucker for. This one was written by Mike Barth, and is one of my favorite tracks.

“The Savings And Loan Crisis” is another cool instrumental whose pace suddenly picks up, that one written by Paul Margolis.

“A Thousand Times” is a country song about a woman doing a man wrong, leaving him. It opens with these lines: “A thousand times you said goodbye/A thousand times I’d like to die/You don’t think I’m counting, but I’m going crazy.” Country music is often the perfect vehicle for these thoughts, as it’s so adept at tackling and expressing that subject and those feelings. “A thousand times you’ve gone away/And I can’t believe a word I say/About how I don’t miss you.” “A Thousand Times” was written by John Shock.

"Low Man" is a fun tune, taking a man's misery and turning it to a joyful experience. “Yes, I’m the low man on the totem pole/My heart is black as coal.” And I dig these lines: “Well, I love you so much it hurts me/I love you so much, baby, that it hurts you too.” John Shock wrote this one.

"While You Were Gone"

The fun then continues with another John Shock tune, "While You Were Gone." This one has a bluesy edge, and is about what he did while his woman was gone: "Well, I hit the bottle, and the bottle hit me/I got real drunk for a week/And then I ran up debts/I wrote bad checks/I smoked twenty cartons of cigarettes/And I kept playing my favorite song/That's what I did while you were gone." I dig the instrumental jam section.

Live From Highlandtown is scheduled to be released on April 19, 2014 at the band's next reunion show.
Posted by Michael Doherty at 6:56 PM