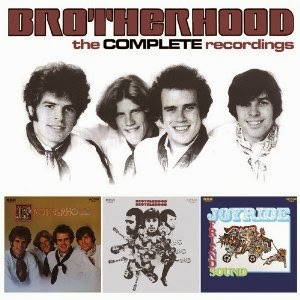 I’m a big fan of mid-to-late 1960s rock music, and it always comes as a pleasant surprise when I suddenly learn of a new band from that time, particularly when it’s a band as good as Brotherhood. How had I not heard this stuff before? This CD grabbed me from the opening track. Brotherhood is a band started by three members of Paul Revere And The Raiders – Phil Volk, Drake Levin and Mike Smith – joined by Ron Collins on keys. I like Paul Revere And The Raiders, but this music is actually much more interesting.

This two-disc set contains the band’s three albums, originally released in 1968 and 1969, though one of them is under the name Friend Sound. And though the Friend Sound record is the band's second album, it’s placed on the second disc, apart from the two official Brotherhood records. This set also contains extensive liner notes on all three albums by Bill Kopp, plus some notes by Phil Volk.

The band’s first, self-titled, album kicks off with “Somebody,” which opens with some applause, like the group is taking the stage at a small venue full of friends. The song kicks in, and there is kind of a wild, untamed bluesy vibe to this that I love. “Somebody is needed here/Somebody to ease my fear.” It’s raw late 1960s rock, then suddenly changes to a very clean pop/reggae sound very briefly, before going back to that rock feel, and ending with a good jam.

“Woman Unkind” is a very cool, fun rock number with some nice work on guitar. It has that familiar ‘60s feel in its rhythm and the sound of its vocals. I totally love this song. The sound then changes completely on “Pastel Blue,” which has a kind of light jazzy feel, and softer, sweet vocals.

Things turn odder with “Doin’ The Right Thing (The Way)” an interesting and vaguely trippy tune with lines like “I’ve seen too much in my short few years/Deep in my heart I feel old.” It verges on psychedelic, but with the drive and power of a straighter rock tune, giving it an original and peculiar feel. It’s one of this collection’s many highlights.

“Seasons” is another interesting tune, with a completely different feel, driven by vocals, acoustic guitar, harmonica, and strings. This song has a haunting quality and moments of glory. “Why does this pain not make her cry?/Why is she sleeping?”

“Ice Cream” begins with a very cool slow groove. I love the smooth vocals during this section, the way certain words are stretched out. Then the song goes through some changes, in rhythm and the way the vocals are delivered. It’s just a really good tune overall, another of the first album’s highlights.

Another personal favorite from that first album is “Jump Out The Window.” And yeah, it’s about jumping out of the window, but not to one’s death, but rather to a new freedom. “So I jump out the window/And I float through the air/I just jump out the window/I don’t have a care.” It’s an escape. This is a song of someone discovering a freedom, by doing the unexpected. It has a really positive vibe, with some goofy lines like, “I’m a hip Mary Poppins.” This song was released as a single.

As good as that first album is, the band’s second official Brotherhood album, Brotherhood Brotherhood, is in some ways even better, although Mike “Smitty” Smith and Ron Collins are not on this record, having left after Joyride. This one features a couple of interesting covers.

It opens with a fun, positive tune called “Don’t Let Go.” Sure, its message might seem a little naive and easy, with lines like “Things get better if you want them to/You can feel good, now it’s all up to you/It’s easy to find what you’re looking for/You’ve got the key to heaven if you open up the door,” but then again, the tune makes you feel better, raises your spirits, and so you start thinking, Well, why not? The song has the feeling of a celebration, not a bad way to open an album. There is more great energy on “Back Home Again,” particularly in its instrumental section.

Things turn jazzy with the catchy “Glory Train.” I like how the vocals are a strong part of the rhythm of the song. And they give us a good bluesy rock tune with “Deep Blue Sea,” different from the feel of the other songs, but quite good nonetheless.

Brotherhood does a really interesting and surprisingly heavy cover of “California Dreamin’” (with maybe a Jimi Hendrix or Vanilla Fudge influence). It totally works. I don’t recall ever hearing a version of The Mama & The Papas song quite like this one. And wow, I fucking love near the end when they go back to the opening lines, the way they really work the line, “All the leaves are brown.” Wonderful! And they add some lines at the end. They stretch this song out, bringing it to just over five minutes. The band also does a cover of The Beatles’ “When I Get Home.”

Oddly, one of the tunes from Joyride is included on this album, “Love Sketch,” this time with vocals. (This song reminds just a bit of Sonic Youth’s cover of the Carpenters’ “Superstar.”)

Between Brotherhood and Brotherhood Brotherhood, the band released an album titled Joyride, but under the band name Friend Sound. This is more of an experimental album. It opens with its title track, an odd, exploratory tune, with a voice speaking briefly over a steady bluesy groove. It is the groove that takes over, becoming a somewhat hypnotic jam. Then a voice calls for “Quiet” as the song fades out.

“Childhood’s End” begins with sound effects of a truck before coming on as a trippy rock instrumental. And then it’s suddenly over before really getting started. “Love Sketch” was also included on Brotherhood Brotherhood, also released in 1969. This first version is an instrumental.

“Childsong” features sounds of children playing, with some bird sounds and chimes over that. What’s interesting is that a recording of Phil Volk singing from when he was three years old is mixed into it. Otherwise, it’s basically just children playing for several minutes.

Much more interesting is "Lost Angel Proper St.," a psychedelic jam with spoken word vocals. The recording is slowed down at a certain point early on. The jam suddenly halts like halfway through the song, and is replaced by the ticking of a clock, a child’s toy and pipes for a short while before picking up again, and with more spoken word vocals. It’s certainly an interesting track, though I’m not sure how often I’ll listen to it. This is one of the record's two long tracks.

The album’s other long track, "The Empire Of Light 2," features some interesting exploration. It's a fairly mellow tune, and I got into it after I lay down and let it take me where it was going.

The Complete Recordings was released on February 4, 2014 through Real Gone Music.

Posted by Michael Doherty at 6:35 PM