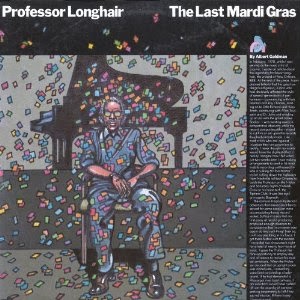 The Last Mardi Gras is a wonderful, and totally fun, two-disc set of New Orleans spirit, combining R&B, boogie woogie, jazz, and blues. There are lots of originals (mostly on the second disc), along with some nice choices of covers. I absolutely love this music. There is something about it that just makes me feel so damn good. I wonder what would happen if psychiatrists prescribed this album rather than drugs for depression. I think they ought to try it. No harmful side effects! In “Hey Now Baby,” Professor Longhair makes even the worry over a woman sound fun. The Last Mardi Gras is a live album that was recorded in February of 1978 and originally released in 1982. This re-issue contains the original liner notes.

The Last Mardi Gras opens with “Big Chief,” a groovy, jazzy R&B tune. The vocals don’t come in until two minutes into the song, after some delightful whistling. But of course it’s the piano at the heart of this fun little number. Things really get cooking with “Jambalaya,” a song that I always have to remind myself was written by Hank Williams. That still strikes me as odd. This tune has a great party vibe. “Son of a gun, we want to have a little fun on the bayou.”

“Mess Around” is a fun instrumental tune dominated by the piano, of course, but with a lot of help from the horn section. “Doin’ It” is another seriously fun instrumental tune with the piano basically dancing, and some delicious work on horns. This one is an original, and is for me, one of the album’s highlights. “Gone So Long” is another original instrumental, and the piano drives this one too, with some relatively subdued percussion backing it. But the piano rocks and rolls, and nothing else is needed. It must have been something to be at these shows.

Professor Longhair does an excellent rendition of “Cry To Me.” I really love his vocals on this track; they’re so expressive, so warm, and even a bit playful in the choices he makes, the way he hits those highs and lows. This song was originally made popular by Solomon Burke, and has been covered by a lot of artists over the years. Another song I’ve always loved since I first heard it on an old record when I was a child is “Rum & Coca Cola.” It’s a great song. Professor Longhair does an instrumental rendition of this song that is totally delightful.

“She Walks Right In” is a dose of early rock and roll sounds, when music was full of joy, before the roll was taken out. “She walked right in, then she walked right out.” That leads right into “Shake, Rattle & Roll.” And there is a cool instrumental section with some fun stuff on saxophone, plus some nice work on guitar.

“Bald Head” is a ridiculously goofy and fun tune. I love the backing vocals responding with the title line. And sections of the song are done in a sort of spoken word style, almost like telling a joke. “Now the boy decided he wanted to take the girl out for a walk...” “Her Mind Is Gone” is another fun track. I love these lyrics: “When a woman starts doing wrong, she won’t do right no more/I remember when I first got married, I tried to settle down/The woman that I took for my wife took me for a clown/’Cause her mind was gone.” The piano is great on all the tracks, but there are some particularly delicious moments on this track. And check out the saxophone.

The Last Mardi Gras ends with a great Mardi Gras song, "Carnival In New Orleans," featuring some more whistling. Professor Longhair sings, “You know, if you're going to New Orleans, you ought to go see the Mardi Gras.” I agree. Everyone should experience Mardi Gras in New Orleans at least once. (By the way, this CD re-issue was released on Mardi Gras.)

The Last Mardi Gras was re-issued on March 4, 2014 through Real Gone Music.
Posted by Michael Doherty at 3:30 PM