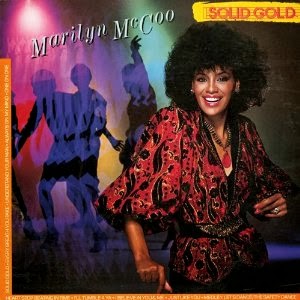 When I was a kid I watched Solid Gold regularly, at least for its first several seasons. And I loved it. I immersed myself in the music, and of course enjoyed watching the Solid Gold dancers. Even before MTV’s heyday, music and television were strongly linked for me. Before Solid Gold, I had loved The Monkees, Sha Na Na, and The Partridge Family (I was disappointed when my parents expressed no interest in traveling around in an old bus, playing instruments). So Solid Gold had an obvious and immediate appeal for me. The show was co-hosted by Marilyn McCoo, vocalist for the 5th Dimension, from 1981 to 1984 (the years when I was a regular viewer), and then again from 1986 to 1988 (when I had drifted away from pop music, having discovered folk).

During that time, Marilyn McCoo released her first solo album, appropriately titled Solid Gold (though the song of that title is not the show’s theme song). The album features Marilyn’s takes on several hits of the early 1980s, including songs by The Police and Culture Club. It has now been released on CD, and includes a previously unreleased bonus track. The CD also includes new liner notes (and a photograph on the back featuring perhaps the ugliest sweater in the history of clothing – apart from Christmas sweaters, that is).

The album kicks off with the title track, “Solid Gold.” This song is not the television program’s theme song, but it is a song about the music, about the joy of hearing the hits. “Every time I hear my favorite song/I get excited and I want to sing along/My heart really comes alive when the band begins to play.” It’s about a love for music, as well as about falling in love to the music, something most everyone can relate to.

“Every Breath You Take”

Synchronicity was such a huge album in 1983 (that “Wrapped Around Your Finger” video seemed to be on constantly, with all those candles), and so it makes sense that Marilyn McCoo would tackle one of its many hits. Her choice is the beautiful “Every Breath You Take.” Her version, of course, isn’t nearly as good as the original, and has even more of a pop feel, but is still enjoyable.

“Understand Your Man” has that unmistakable 1980s sound. It even has that obligatory, brief section of percussion and vocals that characterized much of the music at the time. This tune was written by Alan Gordon and Laura Creamer (it’s not the Johnny Cash song).

“Always On My Mind”

Marilyn’s vocals really get a chance to shine on “Always On My Mind,” a song that was a hit for Willie Nelson in 1982 (though originally recorded a decade earlier by Brenda Lee). This track is, for me, one of the disc’s highlights. In addition to her wonderful vocals, there is a seriously good lead section on saxophone.

Marilyn then covers one of Hall & Oates’ mellow tunes, “One On One,” giving her another opportunity to show what she can do vocally.

In 1983, I couldn’t get enough of Culture Club. That was the year they released Colour By Numbers, with that huge hit "Karma Chameleon." Marilyn covers “I’ll Tumble 4 Ya” (a song from 1982’s Kissing To Be Clever, but released as a single in 1983), giving it her own fun spin. I like the percussion section.

Marilyn McCoo gets to go into some slightly jazzy vocal territory on “Just Like You,” which also features a brief, nice solo on saxophone. This is a sweet tune, written by Jeff Pescetto.

David Bowie and Men Without Hats

The most interesting track and choice of covers is the original album’s final track: David Bowie’s “Let’s Dance” going into Men Without Hats’ “The Safety Dance,” both of which were released as singles in 1983. I always dug “Let’s Dance,” though truly it’s one of the least intriguing songs Bowie ever recorded. And “The Safety Dance” is just pure fun, one of the greatest pop tunes of the 1980s. Marilyn McCoo’s combination of the songs oddly works, and is one of my favorite tracks on this release. And it certainly doesn’t hurt that there is saxophone. The track returns to “Let’s Dance.”

“Relationship” is the CD’s bonus track, a song written by Dave Davies (yes, of The Kinks, one of my favorite bands). The chorus has a sort of reggae thing happening, which is surprising. It’s a pretty cool tune about suddenly finding oneself in a new relationship. "I'm just a wanderer, never settling down for very long/Maybe you'll make the difference this time."

Solid Gold was released on CD on March 4, 2014 through Real Gone Music.
Posted by Michael Doherty at 9:28 PM