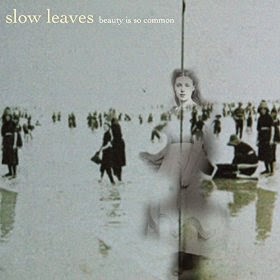 Last year Slow Leaves released their debut EP, Second Chances, and those three tracks were among the best songs of the year. That EP made me excited for the full-length CD, which was released in September of this year. Beauty Is So Common, the new CD, is an absolutely wonderful collection of tunes, somewhere between folk and rock, with some gentle grooves and 1970s influences. All of the tracks were written by Grant Davidson, and performed by him and Rusty Matyas. There is some really good, honest songwriting here, without artifice, without airs. This is one of my favorite albums of the year. By the way, if you missed last year's EP, this CD contains two of those songs.

The album opens with one of my favorite tracks, “Everybody Wants To Be In Love.” It begins as folk, but grows from there into something gorgeous and moving, with that steady pounding on the drum working in time with our hearts. When that drum comes in, it’s like we are ourselves are moving toward love. Before it, it’s like a distant wish to be in love, but when it comes in, it’s like we’re now actively seeking love. There is movement toward joy, and by the end, this song has us all feeling hopeful. “How does it feel when the world like a wheel/Spins fast under your legs, and your hips turn to steel/You rush to find the woman before whom to kneel/Everybody wants to be in love.” Dany Joyal joins them on bass for this track.

The second track, “Nostalgia,” seems to pick up from there, with a good, but more relaxed beat, and with country elements and smooth, beautiful vocals. This song has a friendly, laid-back vibe. “Every woman and every man/Holding onto someone the best they can/We were leaning, backs to the wind.”

Then “Life Of A Better Man” kicks off with a great rock groove. This is one of the two tracks that also appeared on last year’s EP. It clearly takes influence from some of the 1970s music, but in the short instrumental moments reminds me of a Belle And Sebastian song. Here is a taste of the lyrics: “Got to start life over to end up like this/There’s a creek in the floor, and a shadow at my door/And a fear of what’s at hand/It’s a ghost in the hall, an image that I call/The life of a better man.” Slow Leaves follow that with “Dreamer,” a delightful acoustic tune with a very positive vibe in lines like “Where no one has to ride alone/And those that fall behind will be waited for.” But when Grant sings, “And if we’re wrong, we’re wrong,” that’s when the song becomes even more effective for me, with a stronger emotional core.

“Second Chances” sounds like the very best of 1970s soft rock. It’s so beautiful, and yet so catchy too. This is the other song that was included on the EP, and is one I love more and more each time I hear it. “Neighborhood Watch” has a different feel from the other tracks, with a cool, meaner blues vibe that is delicious. I really like the guitar on this track.

“Only Sound To Hear” has a more intimate sound, particularly in the way the vocals are presented. It sounds like he’s so close, and there’s no need to project. There is a relaxed feel, like among friends. And even after the song kicks in, it’s able to retain a kind of intimacy that is sweet and moving. “I don’t have much money/And nothing to say/Just secondhand stories I’m offering free/And some old ideas I’ve forgotten to tell you/And stars that shine dimly and too far to see.”

I also really love the feel of “Institution,” another highlight of this CD. “Will the morning light see us through/Chase the shadows from the room.” Then “Country Of Ideas” is more of a country rock number, with kind of a bluesy rhythm.

Slow Leaves wrap things up with a nice country folk tune, “Rearview,” that even includes harmonica. There’s a humor there as well, for while he sings, “The lifelong drive to the gallows” (a great line in itself), there are backing vocals singing “sha-dooby-doo,” giving it a playful quality. Clearly, Grant Davidson is not taking himself too seriously. Toward the end, he sings, “Maybe you can take me along.” Absolutely. I imagine this disc will remain close to my CD play for quite a while.

CD Track List
Beauty Is So Common was released on September 9, 2014.
Posted by Michael Doherty at 7:18 PM