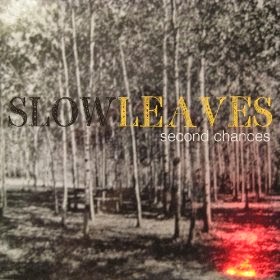 Second Chances is the debut EP from Slow Leaves, the Canadian duo of Grand Davidson and Rusty Matyas.  This three-song EP is being released in anticipation of a full-length album to be titled Beauty Is So Common (there is no release date confirmed yet). This EP is a great surprise, a beautiful gem. Early on in this EP’s first track is a line that completely drew me in: “Fell asleep in the car, woke up at the wheel.” For some reason, that line grabbed me, and I was hooked.

All of these tracks were written by Grant Davidson. All of the instruments were played by Rusty Matyas and Grand Davidson. If these three tunes are any indication of the style and feel of the full-length album, then that is a CD I am looking forward to enjoying.

“Life Of A Better Man”

The opening track, “Life Of A Better Man,” begins with that great, steady, familiar rock groove. And as I said it has that line, “Fell asleep in the car, woke up at the wheel.” (The rest of the lyrics are not too shabby either.) There are also some interesting changes, like when Grant sings, “Tell me I’m wrong.”  I’m particularly fond of some of the work on piano (some of those bright tones bring to mind a few Belle And Sebastian songs). I really dig this tune.

The EP’s title track, “Second Chances,” has kind of a beautiful intro. There is a wonderful laid-back quality to this song, including the vocals. I love the simple bass line. There is something reminiscent of some of the best of the 1970s in the sound of this song. Here is a taste of the lyrics: “A chance to be brave or dig a grave/She’s fishing with a line/For a man inside/All that you catch is second chances.”

“Careless And Serene” is an excellent acoustic tune. It opens with just the guitar. I got all caught up in the guitar part of this song. It has this great, comforting feel. I just wanted to wrap it around me. The vocals are pretty sweet too, as he sings, “And I’m the one who must take you through the eyes of the storm/And keep you warm.”

Second Chances was released on October 8, 2013.
Posted by Michael Doherty at 2:44 PM