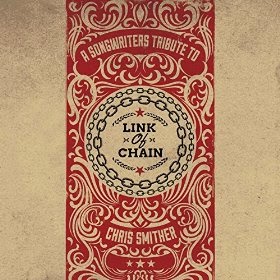 In July of this year Chris Smither released Still On The Levee, a look back at some of the great music of his career, in which he presented new versions of some of his best material. It reminds you of what an excellent songwriter he is. And now several other talented songwriters have pooled their passion and skill for the creation of a tribute to Chris Smither, Link Of Chain. There are some amazing musicians and singers on this CD, including Dave Alvin, Loudon Wainwright III, Jorma Kaukonen, Bonnie Raitt, Peter Mulvey and Peter Case.

This compilation kicks off with its title track, a fantastic rendition of “Link Of Chain” by Dave Alvin. His voice has a surprisingly soothing and intimate quality. This version has that dose of blues, of course, but also a kind of beauty. It’s a seriously good rendition.

It’s followed by Loudon Wainwright’s take on “Place In Line.” Loudon Wainwright appeared on Still On The Levee, on that album’s version of “What They Say,” and interestingly, Chris Smither plays electric guitar on this track. That’s right: he appears on his own tribute album. And why not? As you might expect, Loudon does a fun version of this tune. I also dig Dave Goodrich’s touches on piano. “And now tomorrow’s just your grand plan for yesterday.” The original version of this song is on Chris Smither’s Hundred Dollar Valentine.

I absolutely love Mary Gauthier’s mean, low-down bluesy rendition of “I Feel The Same.” Her voice has this great quality that gives you the impression she’s capable at any moment of sticking a knife in you. It’s a voice of someone who can take care of herself. “You won’t forget me or the sound of my name.” This is a song that Bonnie Raitt has covered too, and it’s one that Chris Smither has included on a few albums.

Josh Ritter does a sweet, kind of bright folk version of “Rosalie.”  His voice reminds me of Brooks Williams at times. I particularly like the backing vocals on the chorus in this version. This is another tune that Chris Smither has recorded several times.

I’m a big fan of Jorma Kaukonen’s work. I was fortunate enough to catch a show on that Jefferson Airplane reunion tour more than two decades ago, where he also did a short Hot Tuna set. His choice from Chris Smither’s catalogue, “Leave The Light On,” seems perfect. The age in his voice works beautifully, and there is something sweet there as well as a bit of humor, which fits so well with lines like “That drummer in my head needs inspiration/There’s a lack of syncopation/That holds me to a line.” This track is one of the disc’s highlights for me. Besides, it’s such a damn good song.

Tim O’Brien provides an absolutely delightful version of “Origin Of Species,” playing banjo and doing a bit of yodeling and scat. But it’s Jim Hoke’s clarinet that really makes this track something special. These guys are clearly having a good time, and that joy transfers so easily to the listener.

Bonnie Raitt provides the only live track of this collection, “Love Me Like A Man,” recorded in October of 2012. And she introduces the tune by mentioning Chris Smither: “This is a Chris Smither song. One of my favorite artists who’s still touring, and you’ll love him if you haven’t seen him.” She’s joined by James “Hutch” Hutchinson on bass, and they sound so sexy together. Bonnie Raitt is just fucking fantastic, and she owns this song. She included versions of it on her 1972 release, Give It Up, and on her 1995 live album, Road Tested.

The only track from this CD that was previously released is Peter Mulvey’s version of “Time To Spend,” which he included on his 2012 release The Good Stuff.  Peter does a groovy, jazzy rendition that is excellent. This is also the second track on this compilation to feature David Goodrich.

This collection concludes with Patty Larkin doing a moving, bluesy, somewhat haunting rendition of “Train Home.” She performs the vocals and all the instruments on this track.

Link Of Chain: A Songwriter’s Tribute To Chris Smither was released on September 30, 2014 through Signature Sounds.
Posted by Michael Doherty at 1:50 PM