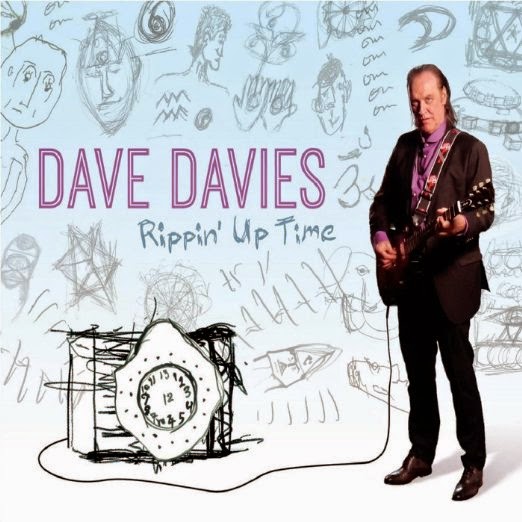 Back when I was a teenager and the conversation topic was often music, someone would inevitably ask, “Beatles or Stones?” And I’d answer, “Kinks!” The Kinks were one of the best bands in the history of music, created by brothers Ray Davies and Dave Davies. And Dave Davies continues to put out excellent rock albums. In some ways, his new album, Rippin’ Up Time, is a look back, in songs like “Front Room,” and often has that nice raw sound that I’ve long associated with The Kinks. It’s also kind of a celebration of rock music, even in the somewhat silly “King Of Karaoke.” But Dave still has plenty to say, plenty that’s relevant. Check out “Mindwash” for example.  There is a lot going on in these tracks, and the more I listen to this album, the more impressed I am.

Rippin’ Up Time kicks off with the title track, which begins with some loud, raw electric guitar before Dave’s familiar voice comes in. This track has kind of a heavy sound. There is something loose and unhinged, even frightening, to the sound, to the approach, which works perfectly with the song’s lyrics: “Ripping up time, I’m out of my mind/There is madness here.” This is a wild way to open the album. And it’s followed with “Semblance Of Sanity,” a strange, spacy tune that also touches on madness (“I’m really kinda crazy but I have so much fun”). I love the spoken word section of that song: “I know a way out of here/Come with me.” Madness is also a subject of “Johnny Adams.”

“King Of Karaoke” is such an odd tune, about a popular hobby that I personally can’t stand, turning one of its aficionados into royalty. It touches on a lot of famous songs, such as “Paperback Writer” and “Good Vibrations” and – playfully – one of the Kinks’ own tunes, “Sunny Afternoon.” It’s such an interesting song, going in surprising directions musically.

Dave Davies then looks back to his own musical roots in “Front Room,” singing, “My sisters sing and dance around the gramophone, blaring out Little Richard and Fats Domino,” and telling the story of the beginning of The Kinks in the lines “We started a band, rehearsed all plugged into one amp – with Pete, Ray and Jonah from next door.” And the song itself has something of a Kinks feel. Near the end it even includes a nod to songs like “You Really Got Me” with a certain guitar riff. At the end Dave sings, “Yesterday is gone but memory still lingers on.”

“Nosey Neighbors” has a great classic rock feel, with a bit of a punk thing in the attitude. So yeah, this could easily be a Kinks song. And it’s one of my favorites on this release. One thing I've always loved about The Kinks is the band’s odd sense of humor which is apparent in many of its songs. And that same sense, that same attitude runs through this number. Here is a taste of the lyrics: “When I get home, or just parking the car, or go in the yard just to water the plants/Those nosey neighbors looking at me/Through a hole in the fence or from behind a tree.” It’s a whole lot of fun.

Dave’s son Russ Davies plays on the album’s final two tracks, which they co-wrote together. The first, “In The Old Days,” has a punk thing happening that I really like. And the second, “Through My Window,” is another favorite of mine. This one is kind of beautiful and sweet and positive. And for an album that often looks back, it’s fitting for this to be its concluding track, with the lines “The past is gone, it’s all been said, the road continues up ahead/No regrets, what’s done is done/The future’s here with a brand new song.”

A couple of side notes:

Posted by Michael Doherty at 3:01 PM