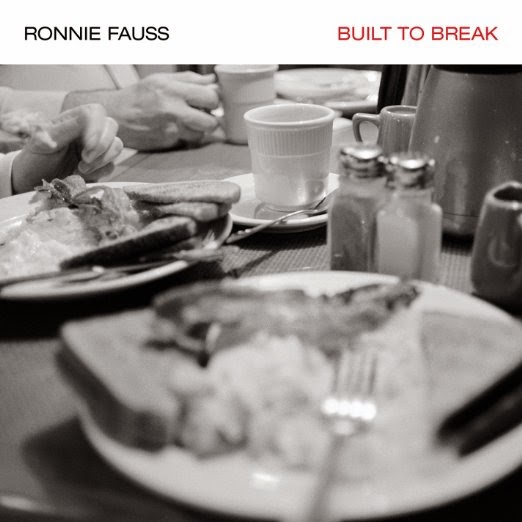 Ronnie Fauss’ new CD, Built To Break, his second release on Normaltown Records, features a good mix of country rock tunes and quieter acoustic songs. Sure, there’s plenty of great guitar work and energy, but for me, it’s this album’s lyrics that really drive the tunes. I love these lines from “A Place Out In The Country”: “I’ve got a lot of love inside me/And that’s where it’s gonna stay.” And check out these lines from “I Can’t Make You Happy”: “Ask anyone you know and they will tell you/That everyone you know will somehow fail you.” All but one of this CD’s tracks are originals, written by Ronnie Fauss.

The opening track, “Another Town,” comes on strong, with a loud burst of energy, then settles into a really good country rock tune, with lots of guitar. I would love to see him perform this one in concert. “So don’t ask me when I’ll be coming back through that door/’Cause, honey, you don’t ask the questions around these parts anymore.” That’s followed by “A Natural End,” which is just a bit more mellow, but then rocks on the chorus: “Let’s have a natural end before we begin/And maybe then we’ll have a chance to win/Let’s have a natural end before we begin/And maybe then you and I will have a chance to win.”

“The Big Catch” is more in folk and country realm. It has a quieter, sweeter sound, but the lyrics are certainly not sweet. Check out these lines: “And there’s something your parents never told you/That the place in between where they slept/Was filled up with lies and resentment/The only things your parents ever kept.” This is a song about how sometimes the mistakes that parents make are then internalized and carried on by the children when they too become parents. It’s a really strong track, one of this CD’s many highlights.

Another highlight, “Eighteen Wheels,” is one of my favorites, a seriously excellent country rock tune. This track features Rhett Miller (from Old 97’s) on vocals, plus some very cool work on piano by Chris Tuttle. I love the energy of this song. This would be a good one for a road trip mix CD. Its lyrics contain references to country artists like Johnny Cash and Emmylou Harris, and also Bob Dylan. “I Can’t Make You Happy” also refers to Bob Dylan, specifically “Tangled Up In Blue.” (By the way, one thing I find interesting in that song is the repetition of “Even if I tried” at the end, for it indicates that he actually hasn’t tried to make her happy.)

“Never Gonna Last” is more in the acoustic country realm, and is another of my favorites. This one is a duet, with Jenna Paulette providing the second set of lead vocals, and is about a problematic relationship. Jenna sings, “I’ve been planning for the future/You’ve been living in the past.” And Ronnie responds, “All we know about tomorrow/Is that it’s never gonna last.” In addition to excellent vocals, this track has a really nice instrumental section.

After that one, Ronnie gets back to rock with “I’m Sorry Baby (That’s Just The Way It Goes),” yet another excellent tune. It’s strange, because the lyrics totally depress me, but the music makes me want to grab a beer and dance. It feels a bit odd to dance to lines like “That emptiness it fills you from your head down to your toes.” But perhaps dancing is exactly what we should be doing, as the music of this song sort of tells us to make the best of it, even as the lyrics have a fatalistic quality. “And the days go by so slowly where they used to go so fast/And whiskey does not taste as good when you only pour one glass.”

“Song For Zula” is the album’s only cover. It was written by Matthew Houck, and originally recorded by Phosphorescent. I really like these lines: “See, the cage, it called. I said, ‘Come on in’/I will not open myself up this way again.” This one refers to Johnny Cash, specifically to “Ring Of Fire,” in its opening lines.

CD Track List
Built To Break was released on November 4, 2014 through Normaltown Records.
Posted by Michael Doherty at 2:37 PM