Pugwash: “A Rose In A Garden Of Weeds: A Preamble Through The History Of Pugwash” (2014) CD Review 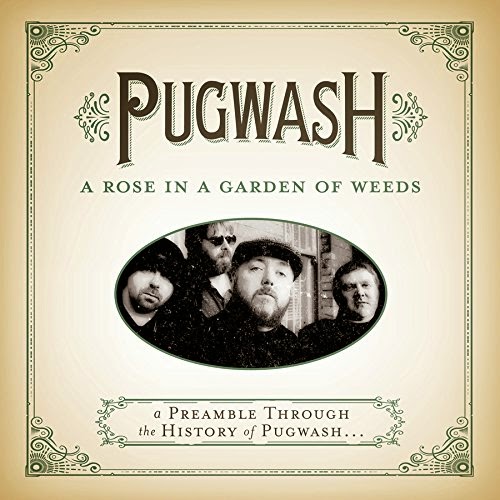 I had heard of Pugwash but had never actually had the chance to listen to this Irish band. That is, until Omnivore Recordings released A Rose In A Garden Of Weeds: A Preamble Through The History Of Pugwash. This is the first CD of theirs to get an official release in the United States. And so although some of these songs are more than a decade old, they’re all new to me. All songs are originals, written or co-written by Thomas Walsh. There is definitely a 1960s pop influence to many of these tracks. A Beatles influence is heard in sections of “Here,” for example. But there is also a bit of ELO to the band's sound. And the repetition of the line “I’ll give it all up to get away outta here” in “Anyone Who Asks” reminds me a bit of Phish. Though the band’s influences will seem obvious, this band does have its own sound, and it’s a sound I want to hear a whole lot more of.

This compilation kicks off with “Take Me Away,” such glorious and perfect pop rock with a sound designed to make you feel good, to catch you up in its arms and pull you along. And check out these lines: “There are some so rich with love their beauty astounds/Why they still come last is an answer not to be found/So I implore you/To take me away.” And then toward the end of the song there’s a Beach Boys-type vocal moment, coming as a delightful surprise. (There are some more Beach Boys-type sounds on “It’s Nice To Be Nice.”)

Right from the start of “Monorail,” you know this is going to be a fun and quirky track. And when the vocals come in, it becomes a list song. In general, though I love lists, I’m not all that fond of list songs. This one is certainly an exception, as it is so bloody fun. It’s a list of forms of transportation, then adding, “All of these things will get you here to me.” Nice, eh? This track was originally from the band’s 2002 release, Almanac. This is one of my favorite tracks. It was co-written by Thomas Walsh and Keith Farrell.

“Finer Things In Life” is a mellower, sweeter track, an unusual sort of love song with lines like “You build me up and you break me down/I can’t get enough of your love.” But the line that stood out for me the first couple of times I listened to this CD is “Silly but it’s true, so stop me if I’m boring you.”

There is a sound effect of a scratchy record at the beginning of “Shine On Norvell Jefferson,” but once you get past that, this becomes one of my favorite tracks. It has a bit of a quirky vibe to it, but with serious-sounding vocals. There’s some cool work on piano, and even a little bit of country flavor. Really, I can’t put my finger on what it is, but I just love this song. It was originally included on the band’s debut album, 1999’s Almond Tea.

“A Rose In A Garden Of Weeds,” the song that gives this compilation its title, is an interesting, moody piece featuring The Section Quartet on strings. “And then you laugh and then I see why you’re my rose in a garden of weeds.” This song is from the band’s 2005’s release, Jollity.

I absolutely adore the music to “At The Sea.” Check out that instrumental section. XTC’s Andy Partridge co-wrote this one, and does that lead acoustic guitar part, as well as the whistles, kazoos and Mellotron. This track also features Eric Matthews on flugelhorn.

“Answers On A Postcard” is one of the tracks that really stood out for me the first time I listened to the CD. And each time I listen, I enjoy it more. It’s totally delightful, featuring some playful musical touches (I love the work on keys) and some wonderful lyrics. “I cannot believe that when my heart is on my sleeve I am alive/Calling me a masochist when really I’m a pacifist gone wild.” And then, when you think it couldn’t possibly get any more fun, there is a section on kazoo. This track is from 2011’s The Olympus Sound.

This compilation concludes with “Be My Friend Awhile,” also from The Olympus Sound. It’s a strangely beautiful song. Here is a taste of the lyrics: “She’s the one who tore me up inside,/And the one who stole my valentines/But you can have me for a song and a smile,/If you'll only be my friend awhile.”

A Rose In A Garden Of Weeds: A Preamble Through The History Of Pugwash was released on September 23, 2014 through Omnivore Recordings. The liner notes include thoughts from Chris Collingwood and Eric Gorfain.
Posted by Michael Doherty at 2:48 PM