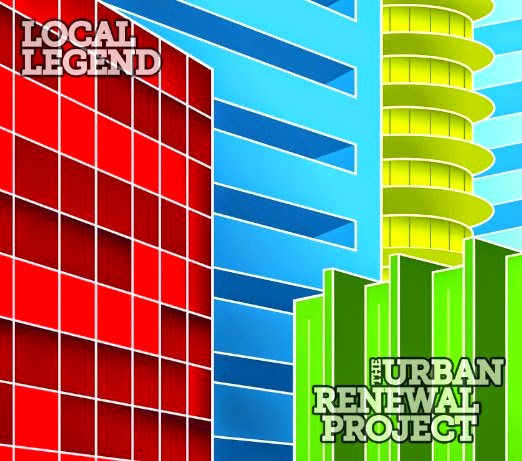 I love it when music shouts out, “Yes!” And the way Local Legend, the second album from The Urban Renewal Project, opens, with those great horns, it’s like a delicious positive burst of encouragement. Yes! And then Aubrey Logan’s vocals come in with a power and bright energy, and there’s a beat to get you moving. “I’m going to do my thing the way I do/No matter what you try to tell me to/What makes you think that you can say I told you so.” Yes, “My Own Way” has lyrics that have an empowering effect. But it’s that great moment on bass that I love most (that’s Michael McFadden). A couple of minutes in, a second vocalist, Elmer Demond, comes in and does a bit of rap, which is interestingly followed by a clarinet. I love how this group takes from all musical corners and combines styles to create a joyous beast. (By the way, “You’re Beautiful” also has a cool bass solo, this time by Dustin Morgan.)

“Rooftops & Parking Lots” has some nice R&B grooves and tones, creating a sweet vibe that is designed to produces smiles, and is totally effective. “And our laughter sounds like ice in a glass of memories.” I have mixed feelings about the rap intruding on the smooth vibe, but overall I really dig this track. Aubrey Logan belts it out at times, and sounds fantastic. And I like the fun “nah nah nah” vocals toward the end.

Things then turn funky for the start of “Make Like You Mean It.” I’m really fond of the bass on this album, and on this track in particular. There are more positive vibes and lyrics, such as these lines: “Make like you mean it/Get up there and let your colors show/Take just a minute/And seize the night, don’t wait till tomorrow.” And for me this one best incorporates hip hop. It flows so well form the main structure of the song, and feels an integral and natural part of it, rather than added on. This one got me dancing.

Any song that opens with a drum solo, as “Redshift” does, is probably something I’m going to be into. And then when the bass comes in, the tune becomes a very cool swinging number, with some great stuff on horns. It takes a moment to adjust to the hip hop vocals, but they work, particularly in conjunction with the slower groove on bass. But it’s the instrumental sections that I most enjoy on this track. That's Satoshi Kirisawa on drums.

“We Big Tonight” begins with a delicious bouncing beat. Then when Elmer Demond comes in on vocals, the music relaxes a bit at first, but soon regains that joyous bounce, and when it does that’s when I absolutely love the tune. Interestingly, when Aubrey Logan comes in, the song takes on a bit of a disco feel, reminding me of Boogie Patrol Express (the Oregon band from the early 1990s). This is another that really got me moving. I love what Elmer Demond does here. And there’s a cool trumpet solo by Elliot Deutsch. This is an all-round excellent track.

“Prophecy” is another fantastic track, with a great groove, and just a fun, positive attitude. It's clear this group approaches the music with joyous hearts. This is a perfect dance tune with a nice lead part on alto sax by Alexander Meyers.