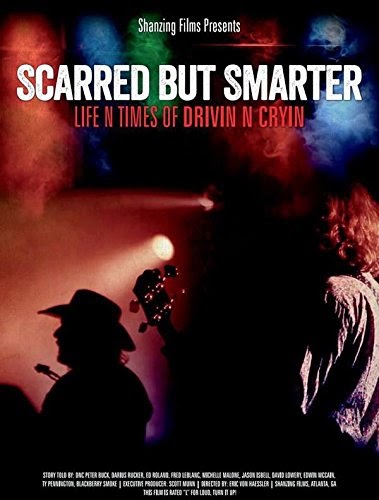 Scarred But Smarter: Life N Times Of Drivin N Cryin is a documentary on the career of rock band Drivin’ ‘N’ Cryin’ and features interviews with band members, both past and present, as well as concert footage and interviews with other musicians.

Drivin’ ‘N’ Cryin’ is a band that has been playing since 1985, yet hasn’t had the recognized success of other bands of such longevity. Filmmaker Eric Von Haessler set out with this documentary to learn why they aren’t more of a success. Early on he does a bit of narration, explaining how he came to do this project. The band members were guests on “The Regular Guys,” the radio show he co-hosted in Atlanta, promoting their first new full-length studio album in twelve years, The Great American Bubble Factory. Eric Von Haessler offered to make the first video for the album, and that began his time of following the band around with a camera.

By providing that narration, the director sort of makes himself part of the subject of the film, as he talks briefly about what he learned regarding success. There is a bit of clunky voice over, such as this line: “Drivin’ ‘N’ Cryin’ is an enigma surrounded by mystery stored in a box full of question marks.” What makes that line even worse is that there really is no mystery. But fortunately this narration is dispensed with early on, and the band members themselves are allowed to tell their story.

The documentary provides a history of the band, focusing primarily on its first decade. It also gives a bit of information on the founding members’ earlier bands, The Nightporters and The Prosecutors (and there is some footage of The Prosecutors performing). The story of this band includes the normal stuff that you get in all rock and roll stories – drugs, fights among band members, problems with record labels, changes in popularity and critical acclaim, and so on. None of this is new, but for some reason it’s still very interesting, and I got caught up in this band’s tale.

Band members are quite open about the troubles in the band, such as Jeff Sullivan’s drinking and Paul Lenz being fired. Paul himself talks about stealing money from the band to buy cocaine and ending up in jail. And there is stuff bout Tim Nielsen’s violent turns. In his interview, Tim claims not to remember most of it. About elbowing a guy in the face he says: “I mean, he had it coming. I don’t remember doing it, but…” He then apologizes on camera. There is material on how the first album didn’t sound at all like how the band sounded live, leading to problems (one factor was that a different drummer played on the album). There is a great anecdote about the band doing an in-store signing when CDs first came out and they weren’t sure which side of the CD to sign, so they ended up signing the back.

By the way, “Scarred But Smarter” is the title of one of the band’s songs and also of one of their albums. Kevn Kinney talks about that song and plays an acoustic version for the camera. Michelle Malone also performs an acoustic version in the film. She has played with the band, and is interviewed briefly. Other musicians interviewed include R.E.M.’s Peter Buck and Cracker’s David Lowery. Lowery says, “Drivin’ ‘N’ Cryin’ and Cracker both suffered from the same thing; it’s like because the song that often times goes on the radio doesn’t reflect the broad scope of the band.”

The DVD includes some bonus material, including a memorial video for band member Van Buren Fowler, who died in 2014. This video has sections of his interview, plus footage of him playing. There is also a music video for Kevn Kinney’s “Whatever.”

The special features include several concert performances, including a really nice version of “Straight To Hell” with mandolin, which was shot at 40 Watt Club. Other concert performances include “Fly Me” (also at 40 Watt Club), “Eye Of The Hurricane” (from August 13, 2010 at Chastain Park Amphitheater) and “Pre-Approved, Pre-Denied” (at 40 Watt Club). I love when Kevn breaks down where your paycheck goes in “Pre-Approved, Pre-Denied,” especially the line, “You’ve got to work two days just to get to work.” The live footage totals approximately twenty-eight minutes.

There is also footage of Kevn Kinney performing a nice acoustic rendition of “Detroit City” at his home with Tom Clark. And there is some backstage goofiness from November of 2010.

Scarred But Smarter: Life N Times Of Drivin N Cryin was directed by Eric Von Haessler, and is scheduled to be released on DVD and Blu-ray on November 4, 2014.
Posted by Michael Doherty at 1:45 PM