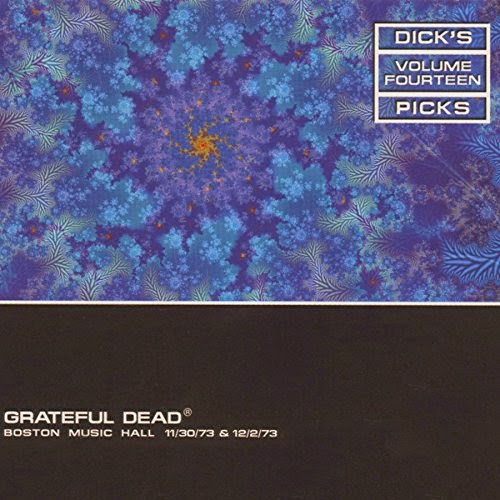 Like a lot of Grateful Dead fans, I am especially fond of the recordings from 1973, one of the band’s best years. It was the year of Wake Of The Flood, when the band had created its own record label, and was really trying to do everything independently. It was a year of some really great jams. Dick’s Picks Volume Fourteen is a four-disc set containing much of two shows the Dead did in Boston toward the end of that year. The Grateful Dead did a three-night stand at the Boston Music Hall. This set contains the first show (November 30, 1973) and the third show (December 2, 1973).

The first disc opens with the beautiful “Morning Dew.” When I saw the Grateful Dead, this excellent song was always placed near the end of the second set. But here the band kicks off the show with it. (Read the liner notes included in this set for interesting information on the start of this concert.) And as you’d expect, there is some good jamming on this tune. After “Morning Dew,” Bob Weir says, “We’re making adjustments, as you can see,” and mentions that Donna Jean Godchaux wouldn’t be at these shows. She was pregnant at the time. And the band launches into the fun “Mexicali Blues.”

After a nice “Dire Wolf,” the disc skips to “Black-Throated Wind,” so we’re missing “Beat It On Down The Line” and “Brown-Eyed Women.” Interestingly, Phil comes in a bit late at the beginning of “Don’t Ease Me In.” And there is some cool stage banter after that song. “Big River” is placed next on the disc, though “El Paso” and “They Love Each Other” followed “Don’t Ease Me In” at the show. Because “Loser” is also cut, the disc then gives us “They Love Each Other,” to keep the Jerry-Bob-Jerry-Bob order of material. And it’s a really good version of “They Love Each Other,” with that great loose groove and that wonderful extra section they did in those days. (That extra bridge makes the 1973 versions of this song my favorites.)

The band then wraps up the first set with “Playing In The Band.” It’s somewhat odd to hear a “Playing” from the mid-1970s without Donna Jean’s vocals, but this track is definitely the highlight of the first disc, with plenty of great jamming. They explore without getting messy. It’s not a spacy “Playing,” but it is an exciting one, with lots of energy and passion.

The second disc contains most of the second set from November 30, apart from the first four songs. As the disc is only approximately sixty-six minutes, I can’t help but wonder why at least one more song wasn’t included, such as “Jack Straw,” which immediately preceded “Here Comes Sunshine.” But what is included is excellent, focusing mainly on material from Wake Of The Flood, including an excellent and interesting version of “Here Comes Sunshine” (probably one of the best versions of this tune I’ve heard). It’s followed by the entire “Weather Report Suite,” also from Wake Of The Flood. I love how it begins so sweetly, so delicately, and builds from there. It then slides right into “Dark Star Jam,” a very loose jam, which gives way to “Eyes Of The World,” one of my absolute favorites, and one of the songs that make 1973 my favorite year for Dead tapes. “Eyes Of The World” was always great, always welcome, but in this first year (the band debuted it in February of 1973), it sounded just perfect. I love the groove of this song. It always makes me happy. And at nearly twenty minutes, this version has a lot of great jamming, including that fantastic bridge they only included in these early renditions. This is the highlight of the second disc for me. They then wrap up the show with “Sugar Magnolia.”

The third disc begins with goofy stage banter before the band gets things underway with “Cold Rain And Snow.” This dis contains some of the first set from December 2, plus the beginning of the second set. Just a couple of beats open this fun version of “Beat It On Down The Line.” A couple of tunes are then skipped, and the disc goes right to a sweet rendition of “Brown-Eyed Women.” And it’s followed by some playful stage banter and interactions with the audience, and a little bit of both “The Merry-Go-Round Broke Down” and “Beer Barrel Polka.” After a good version of “Jack Straw” and an excellent “Ramble On Rose,” we go to the end of the first set, with “Weather Report Suite.”

The second set opens with “Wharf Rat,” and you can hear the understandably excited crowd. This is an excellent, heartfelt version of one of the band’s best songs. Jerry’s vocal performance here makes it a highlight for me. And it moves easily into “Mississippi Half-Step Uptown Toodeloo.”

The fourth disc contains most of the rest of the second set from December 2, 1973. There’s just one song missing – “Sugar Magnolia.” This disc opens with “Playing In The Band,” which starts as a seriously fun version (listen to some of what Bill is doing on drums), and then just a few minutes in turns to a good jam. The band gets out there, but it’s also kind of intense, especially toward the end just before it goes into “Mind Left Body Jam,” or as it’s titled on this release, “Jam.” And that’s when things get really interesting. This jam provides the spaciest material on this four-disc set, and it’s fantastic – at some moments beautiful, at some moments pained. It’s nine minutes in when it gets to the familiar “Your Mind Has Left Your Body” theme (that’s probably when the second track should have actually begun), and it sounds so sweet. It leads to “He’s Gone,” which had a different tone at that time, due to Pigpen’s death earlier that year. It’s absolutely beautiful and moving, one of my favorite tracks. And then suddenly the band bursts into “Truckin.’” The groovy jam has a bit of “Nobody’s Fault But Mine,” and slides gently into one of my favorite songs, “Stella Blue.” And this is a truly gorgeous rendition. The band ended this third show the way the first show began, with “Morning Dew.” And this is one of the best versions I’ve heard. This whole fourth disc is excellent, the band at its best.

Disc Two
Disc Three
Disc Four
This re-issue of Dick’s Picks Volume Fourteen is scheduled to be released on December 2, 2014 through Real Gone Music.
Posted by Michael Doherty at 2:09 PM