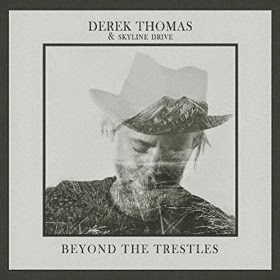 Derek Thomas & Skyline Drive’s new CD, Beyond The Trestles, is a wonderful mix of country rock songs and quiet, acoustic folk numbers. The ones that are most effective for me are those quieter songs, but all of this material is strong. And, like his previous release, Topanga Ranch Motel, all of these tracks are originals. Derek Thomas is a master of mood, creating songs that connect strongly on an emotional level, songs that make a home for themselves inside us so that soon they feel like our own.

Beyond The Trestles opens with a nice mid-tempo country rock tune, “Honey Whiskey.” There is a great, rough quality to Derek’s vocals. It’s a voice that sounds like it’s had a night of drinking whiskey and singing at a bar. A perfect voice for delivering lines like “There’s only one thing on my mind/It’s sweet and strong as the day is long/And it calls my name under the moonlight.” Then later he sings, “You’re likely to find me feeling fine/You’ll probably find me out of my mind/Drinking my honey whiskey.” This song also mentions “Skyline Drive” in its lyrics.

Derek Thomas follows that with a wonderful quiet acoustic number, “Don’t Come Easy,” performed as a duet with Leslie Stevens. She added her voice to tracks on Topanga Ranch Motel as well. Their voices are so interesting together, because each is so distinct, so different.  And then when they harmonize, there is a beauty, and a warmth, a comfort there. There is something so sweet about this sound. This is one of my favorite tracks.

On “Roll On,” there is an intimacy in the soft delivery of the vocals. This is a delightful, mellow country tune, with the band feeling relaxed, just flowing with the groove.  “They’ll try to label you, lock you up and swallow the key/Go down fighting, one arm in the air waving free/’Cause when you’re gone, life will roll on.”

“Face Me Now” is another song that has a strong effect on me, about a father whose whereabouts are unknown. “Memories like a distant hum/Drifting slowly through a song.”  It feels perhaps like Derek is creating music from a situation as a way of gaining some control over it. “It’s not ‘cause I’m sad or weak.”  And I love the addition of backing vocals on the title line, “Face me now,” each asking for the same thing, but coming from different points, creating an interesting dynamic and a compelling song.

“God Isn’t Watching” is another track with a wonderful intimacy, especially in his vocal delivery. “Sleeping underneath the stars/God isn’t watching/It’s just you tonight.” It feels like he’s singing directly to us, like although God isn’t watching, this singer will watch over us. Or this song will. Though there is something sad about this song, there is also something hopeful about it. “Just hold on tight,” he urges us. And this music will get us through. This is a beautiful song, another of my favorites.

Derek Thomas revisits one of the songs from Topanga Ranch Motel on this new album. “Rubber Bullets” had much more of a country feel on the 2012 release. Here it is still has a slow tempo, but is more in a rock vein. I like both versions, though I think I prefer the earlier one.

“Broken Angel” opens with the lines, “She got out of the game/But it was too late/The pain and the hurt/It was all in vain/It was too much to take/She turned down the lights.” Yes, it’s a gloriously sad song. But you might find just a hint of optimism in the line “Just another broken angel attempting to fly.” Because, who knows, maybe she’ll be successful. And she’s not alone: “With all the other broken angels attempting to fly.”

“Ring Them Bells” is another sad one, a song to someone who has passed on, someone who will be “forever a part of me.” But it’s also a pretty song, particularly its instrumental sections. I love the harmonica.

“No Passing Phase” is an interesting, unusual love song, and is one of my favorites. He sings, “And darling, you are everything that I could ever want in this world.” And then female vocals join him, adding to the song’s beauty. I love the vulnerability expressed in his vocal delivery. “Though it was cloudy, I could see a tear in your eye.”

Beyond The Trestles was released on August 31, 2014 on Soul Water Records.
Posted by Michael Doherty at 2:35 PM