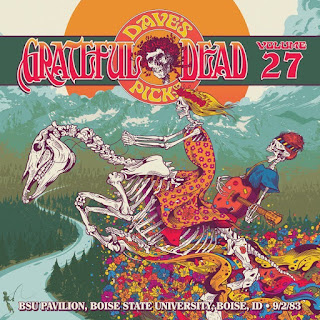 Most Grateful Dead concert releases have focused on shows from the 1970s. Of course there is a good reason for that. The band was in top form for a lot of that decade. My three favorite years for Grateful Dead concert tapes are (in order) 1973, 1977 and 1970. But I’m glad we’re getting some 1980s releases now. The new Dave’s Picks three-disc set contains the complete show the Grateful Dead performed on September 2, 1983 at BSU Pavilion in Boise, Idaho.

As they begin “Wang Dang Doodle,” we hear this strange announcement: “Citizens of Boise, submit or perish. You are a conquered people.” “Wang Dang Doodle” was new to the band at the time, and they deliver a good rendition. A bluesy groove to get things moving in Boise. Plus, it’s great to hear the Dead play anything with the words “All night long” right at the start of the show, a delicious promise that we know is almost never literally fulfilled, but still rings of truth. And maybe this is the night, right? The band goes right into “Jack Straw,” a choppy transition. This is a decent “Jack Straw,” with some absolutely wonderful stuff from Jerry on guitar, raising the level of energy. They follow that with a somewhat mellow and slow “They Love Each Other.” For me, this version gets good during Brent’s lead on keys. That’s the beginning of a really nice jam.

For the Country Bob slots, we get “Mama Tried” into “Big River.” “Mama Tried” has a great little jam, with some nice energy. And “Big River” is always a fun one to dance to, and they keep that groove going for a bit. “Brown-Eyed Women” is one I always get excited about, and this is a delicious rendition, with some interesting stuff vocally and more than enough energy. Listen to Jerry sing “Daddy made whiskey and he made it well/Cost two dollars, you know it burned like hell.” Wonderful. Bob then takes things back in a bluesy direction for “New Minglewood Blues.” It takes a while for this one to take off, but when it does, watch out! There is a fantastic section during the jam, with the band reaching some new heights. The crowd totally appreciates it too. Jerry then follows it with “Big Railroad Blues,” which for just a moment at the beginning sounds distant. But that is fixed quickly, and this version is a lot of fun, at moments feeling like a Chuck Berry rock and roll number. That’s followed by a really pretty and ultimately powerful version of “Looks Like Rain.” The first set then wraps up with “Deal.” I usually don’t care all that much about “Deal,” but this is a particularly good rendition, with a whole lot of energy to keep everyone in high spirits throughout the set break.

The second disc contains the first hour of the second set. The second set opens with that great burst setting “Help On The Way” in motion. This version is a bit messy at moments. “Slipknot!” gets kind of intense, not your fun, groovy version. So when we emerge into “Franklin’s Tower,” the joy is all the greater. And this is a good, pulsing “Franklin’s.” “If you get confused, listen to the music play.” This jam is definitely worth listening to. This version keeps you on your toes, offering surprises, the band really thriving in the moment. It’s also interesting how the band eases out of this one, finishing it gently.

We then get my favorite pairing of tunes – “Estimated Prophet” into “Eyes Of The World.” The energy is high for “Estimated,” and it feels like the band could just continue building and rocking, when suddenly Bob comes back in on the vocals, halting that climb, that fiery drive, and suddenly returning the band to that good groove. Then the band starts jamming again, but it’s a very different type of exploration now. For me, this is when it gets interesting, and after a little while the jam leads into “Eyes,” a song that always makes me happy, a song that always gets me dancing. Its vibe is just so light and positive, you know? The sound gets weird for a bit during the last verse, like it switched from soundboard to audience or something, which caught me by surprise, but this is still an excellent version. For some reason, part of the jam is presented here as a separate track, a very cool jam with heavy percussion. And the second disc wraps up with “Drums.” This is a fairly short “Drums,” less than six minutes, and has some strange moments.

The third disc then picks up with “Space.” This is a seriously good “Space,” much more together than it often is, with themes and some pretty moments. This is one of the best “Space” segments I’ve ever heard. Bob teases “Throwing Stones,” and a minute or so later, the band goes into it. “A peaceful place, or so it looks from space/A closer look reveals the human race.” The song was only a year old at this point, and the jam gets a little ugly, but the song ends gently, like letting go. And then the groove of “Goin’ Down The Road Feeling Bad” begins, and everyone starts to feel optimistic about those “possibilities” Bob mentioned at the end of “Throwing Stones.” We’re all together now, zooming down the road. Then Jerry eases us into a nice, passionate “Black Peter.” There are some incredible moments in this version, particularly vocally, as when Jerry suddenly lowers his voice to draw us in further, to draw us closer. The second set then concludes with a rousing “Sugar Magnolia.” It gets a bit messy just before the “Sunshine Daydream” part, but no matter. The encore is a sweet and powerful “It’s All Over Now, Baby Blue.”