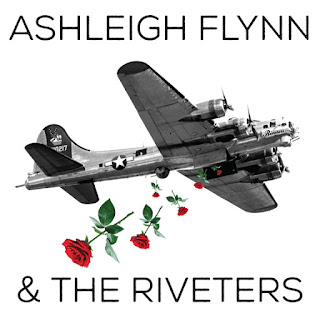 The self-titled debut release from Ashleigh Flynn & The Riveters is a wonderful album mixing rock, country, and folk, and featuring some damn fine songwriting. The album contains all original material, written or co-written by Ashleigh Flynn. Though this is the first CD from Ashleigh Flynn & The Riveters, it is certainly not the first release from Ashleigh Flynn herself. She has put out several solo albums over the last couple of decades, the most recent being the 2016 EP The Low Arc Of The Sun. On the new album, Ashleigh Lynn performs all the lead vocals and plays acoustic guitar, and she is joined by a group of accomplished musicians. The Riveters include Nancy Luca (from Whole Lotta Rosies) on electric guitar, Carmen Paradise (from The Marvins) on bass, Jolie Clausen on drums, Jenny Conlee (from The Decemberists) on keys, Kathryn Claire on fiddle and backing vocals, and Ara Lee on backing vocals.

Ashleigh Flynn & The Riveters kick off the album with a bang, getting things going with an energetic rockin’ number titled “This Love,” which features a lively vocal performance and some wild stuff on electric guitar. Ashleigh Flynn tells us she aims to give us some of her loving, and urges, “Don’t be shy.” No worries there. She is a strong force, which would easily overcome any shyness on the part of the person she’s after. That’s followed by one of my favorite tracks, “The Sound Of Bells.” This one eases in, and has a rather pretty vocal performance. Something about the way she ends certain lines with “mm-hm” just wins my heart. “Winding up the canyon drive/The only stars are my headlights, mm-hm/The stutter of my engine sound/The moonlight dances on the ground, mm-hm.” You have to hear it. This song then kicks in and develops a fun and totally cheerful vibe. This is a wonderful song that makes me feel good. It’s one I’m going to be listening to often.

The band then follows that with a seriously rockin’ number, “Cold Black Line.” It’s remarkable how varied Ashleigh Flynn’s vocal performances are, how she tailors her approach to the material. Then “Too Close To The Sun” has more of a pop sound, and the vocals fit that sound. This song features one of my favorite lines of the album: “Race to the top just to roll down the hill.” “Too Close To The Sun” was written by Ashleigh Flynn and Nancy Luca. Chris Funk, who produced the album, joins the band on vibes and backing vocals for this track. “One Moment” is a song that really grew on me. It becomes kind of a glorious song. Seriously, it energized me and had me singing along. “You’re going nowhere/You can’t seem to get there/And all you want, and all you want is one moment in the sun.” This one was written by Ashleigh Flynn and Virginia Cohen.

“You Will Remember,” written by Ashleigh Flynn and Nancy Luca, has a strong 1970s rock feel. And yes, the line “You will remember my name” does make me think of Fame. That’s followed by “Shrouded Sun,” a mellower, pretty country and folk song. “Don’t know why I always feel lonely/These thoughts coming and going/My heart beats like a burning flame/I know I can’t be the only/One who hears the bells ring.” Kyleen King joins the band on violin and viola on this track, adding to the song’s beauty. “Oh, how beautiful life could be.” Then “Fly Away” has a great positive vibe, and a catchy hook. I also like Kathryn Claire’s work on fiddle. “High On A Mountain” is a pretty country song, with a sweet-sounding vocal performance. “When I go out walking, the moon gives all the light that I need/My only desire is to see you in front of me.” The album then ends with a delightfully playful tune, “Big Hat, No Cattle,” which offers an affectionate and humorous look at the contradictions and poses of a modern country personality. “Big hat, no cattle/Been forever since I sat in the saddle/In fact, I never rode a horse in my life/I’ve got a gun rack and an American flag/On the window of the back of this cab/She’s an F-150 with mud flaps/Silhouettes of tits and ass.” There is some really nice stuff on keys. I love this song.

CD Track List
Ashleigh Flynn & The Riveters is scheduled to be released on September 21, 2018 on Home Perm Records.
Posted by Michael Doherty at 10:41 PM