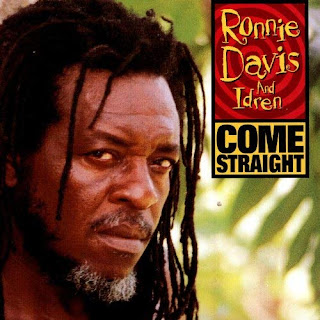 There are moments when I believe that the fascists in power can be defeated by music, by positive vibes, that hearing it will cause them to melt into a foul, corrosive puddle. Maybe that seems possible because music somehow feels like the opposite of what they are. The current administration and music are opposing forces, and music is clearly the greater force. And reggae in particular has such a happy sound that it seems destined to eradicate the pestilence that arose in 2016. After all, everything about the puppet president and his supporters is negative, and they seem to survive and thrive on hatred and ignorance. Reggae is obviously the opposite of that. Listening to Come Straight, an album by Ronnie Davis And Idren, shows that to be true. The album was originally released in 1996, and has now been remastered, and is being re-issued with a couple of previously unreleased bonus tracks. Ronnie Davis was a member of The Tennors and The Itals, and had an extensive solo career as well. He died in early 2017. This new issue of Come Straight contains liner notes by Leroy Jodie Pierson.

In the opening track, “Rough Cut,” Ronnie Davis sings “He got no soul/He got no feeling/Ain’t got no pity/Not even for the poor.” Those lyrics certainly seem applicable to the grotesque man pretending to be president of our country.  I dig the strong bass line of reggae, and here it seems to say a lot, to express the troubles and to tell us to keep moving on. This track also features some really cool work on guitar in the second half. “Rough Cut” is followed by “Rough Version,” which is a different version of the same song. It has the feel of a club mix. “Road Of Tradition” also has a vibe like that, like reggae with a club bent. It was written by Ronnie Davis and Robert Doctor, and contains a reference to The Wailers’ “Get Up, Stand Up.”

“Pick Up The Pieces” has a cheerful sound. “You better pick up the pieces/It’s no time to lose.” Then “Won’t You Come Home” is a sweet, delicious song with an innocent vibe, certainly one of the disc’s highlights. It’s a song that Ronnie Davis had recorded earlier in his career, even released it as a single in the 1970s. “Baby, my sweet baby/I’m longing to hold you in my arms/Won’t you come home.” I love his tender and passionate vocal delivery. “Move On Oppressor” is another favorite, with its wonderful groove and message. “Move on, oppressor, oppressors/You’re only trying to conquer/Move on, oppressor, oppressors/You’re only getting me angry.” And this line seems stands out: “Every time we learn the game, you change the rules.” These days there seem to be no rules whatsoever. This one was written by Robert Doctor.

In “Come Straight,” Ronnie Davis sings “You been treating us with dishonesty,” which of course brings to mind a certain mendacious cretin who likes to pretend to drive large trucks and lead a nation. This song, the album’s title track, also urges people to “Stop your negative thinking.” I know, I know, but it’s so difficult these days. This music is certainly helping. This is followed by “Straighten Up Instrumental,” an interesting instrumental rendition of “Come Straight,” and then by another version of it titled “Come Straight Dub.” In “Ease It Up,” Ronnie Davis asks people to “Ease up the pressure” and to “Hit me with music.” Yes, exactly. That’s followed by “If You Conscious,” in which he sings “’Cause in this time we need more love/In this time we need understanding.” That was true more than two decades ago when this album was originally released, and is true now. The original album concludes with a second version of “If You Conscious,” titled “Conscious Dub.”

This special re-issue contains two bonus tracks, neither of which was previously released. The first is “Mister C,” a song written by Robert Doctor. This has a pleasant, positive sound, and features a wonderful vocal performance. This is actually one of the disc’s best tracks, and has some lyrics that I love. “Hey, time, don’t wait for me/I’ll take it slow and do things on my own/In my own time.” The other bonus track, which concludes the CD, is “Welcome You Home,” a fun, joyous number to leave us feeling good. And that is exactly what we’re looking for.

CD Track List
This special re-issue of Come Straight is scheduled to be released on August 3, 2018 through Omnivore Recordings.
Posted by Michael Doherty at 12:50 PM