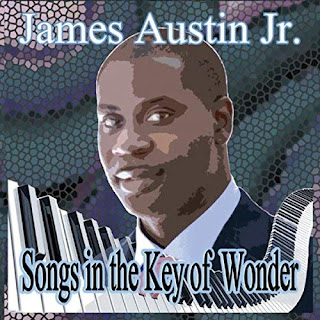 Songs In The Key Of Wonder is an album of Stevie Wonder covers by jazz pianist James Austin, Jr.  What’s interesting is that this is James Austin, Jr.’s debut album. I find it intriguing whenever an artist chooses for his or her first release to do a tribute album. The person the artist is covering and honoring must mean a lot to him or her personally and must have had a strong influence on his or her musical development. If you are going to do a tribute album for your first release, Stevie Wonder is certainly a good choice of artists to cover. Stevie Wonder has so many excellent songs. For the ten selections on this CD, James Austin Jr. chooses a few of Wonder’s most famous songs, such as “My Cherie Amour” and “You Are The Sunshine Of My Life,” but also some lesser-known numbers like “Golden Lady” and “Tuesday Heartbreak.” Joining the pianist on this release are Bobby Broom on guitar, Ben Rubens on bass, David Williams on bass, Kobie Watkins on drums, Samuel Torres on percussion, Jarrard Harris on alto saxophone, and Joe Magnarelli on trumpet.

This album opens with a sweet rendition of “Isn’t She Lovely,” a song that was included on Stevie Wonder’s Songs In The Key Of Life, the 1976 album that obviously gives this release its playful title. James Austin Jr.’s rendition begins differently from Stevie Wonder’s original version, with a nice, thoughtful, quiet introduction on piano. This version then builds and grows in joy, with some wonderful stuff on both trumpet and saxophone, as well as on drums, even including a drum solo. That’s followed by “My Cherie Amour,” which is given a different and prominent rhythm. But it is that lively piano lead that is most interesting. I don’t recall this song ever sounding so sprightly. James Austin Jr. then returns to Songs In The Key Of Life, giving us a rendition of that album’s “Another Star.” This version begins with the good groove, and the piano, when it comes in, basically at first simply joins that rhythm, adding its voice to it (a piano is a percussion instrument, after all). It is then the horns that rise above the strong rhythm. This is one should get your body moving.

“You’ve Got It Bad Girl” is a more relaxed number, with some nice work on bass. This is a song that was included on Stevie Wonder’s Talking Book, a 1972 LP from which James Austin Jr. chooses a total of three tracks to cover. The second song from that album to be included here is “You Are The Sunshine Of My Life,” which was also released as a single and reached #1 on the Billboard chart. The flip side to that single was “Tuesday Heartbreak,” the third track from Talking Book to be covered on this release. This version has kind of an easygoing vibe, and I really like James Austin Jr.’s lead section on keys.

“Part-Time Lover” was a big hit for Stevie Wonder in the mid-1980s, and here James Austin Jr. and his band seem to be having fun with it, getting loose, and delivering a really good rendition. This was never one of my favorite Stevie Wonder songs, but this version is giving me more of an appreciation for it. I particularly love the work on guitar and on drums. That’s followed by “Golden Lady,” which features some really nice stuff on both piano and trumpet, and a prominent rhythm. Then James Austin Jr. dips back into In Square Circle (the album that gave us “Part-Time Lover”) for a cover of “Overjoyed.” This is a gentle, incredibly pretty rendition, and I love that gorgeous, tender work on saxophone. This is one of my favorite tracks. This tribute to Stevie Wonder ends with “Lately,” from Hotter Than July. This version includes just piano and bass, and is an absolutely gorgeous way to conclude the album.

CD Track List
Songs In The Key Of Wonder is scheduled to be released on August 3, 2018 on JCA Records.
Posted by Michael Doherty at 2:22 PM