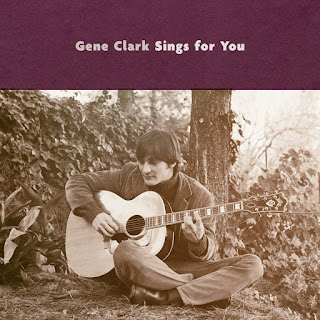 After Gene Clark left The Byrds in 1966, he began his solo career, releasing his first solo album in early 1967. That year he also recorded Gene Clark Sings For You. The album wasn’t released then, and has remained in the vaults until now. Thanks to Omnivore Recordings, we finally get a chance to enjoy this material. The music is folk, with a somewhat loose and raw and intimate vibe. Nothing is too polished here. There is of course some beautiful poetry to the lyrics. In addition to those eight songs, this disc also includes the five songs from the acetate that Gene Clark gave to The Rose Garden, recordings that hadn’t been heard by anyone outside of that band’s members until now. Yes, this is a significant release. Fairly extensive liner notes by John Einarson tell some of the story behind the recordings contained on this special CD. Remaining unknown, unfortunately, are the names of the musicians accompanying Gene Clark on these tracks, except for Alex del Zoppo, who plays piano. All the songs were written by Gene Clark.

The disc opens with “On Her Own,” a wonderful folk tune about a woman who slipped away, a woman he finds himself looking for. “Seven days a week I wake up and look out my window/Sometimes I feel so low I can hardly speak/But what words I hear when she told me how much she loved me/Draw back the shades, I might as well sleep.” That’s followed by “Past Tense,” which has a somewhat full sound that never gets in the way of the vocals. “I know you don’t know what it means/For her to see your face again/I know you think she’ll never leave.”

One of my favorite tracks is “Yesterday, Am I Right,” which opens with the line, “What did I ever do that was right?” Gene Clark is known for his songwriting, but this one in particular has lyrics that are so effective. Check out these lines: “I'd give up the highway if I knew that you would give your loving to me/The letter that I got from you that told me you had gone has gone clear through me.” It’s that last line especially that I love, with the two different ways of using the word “gone.” And his delivery is excellent, with a heartache and desperation that feels true. “What good is my life without you near?”  And then “Past My Door” also features some strong lines and phrases, such as “An afternoon of slight intention” and “A girl who paints deception.”

“That’s Alright Be Me” is one song from this session that Gene Clark would revisit, that other version ending up on the 1998 compilation Flying High. While I like that version, I think this one is much better, more powerful. The way he sings the lines “Hey, hey, can't you see/Baby, don't you lie to me” in this version shows a vulnerability and a pain that are compelling. And I like the strings. Another of my favorites is “Down On The Pier,” which manages to be both catchy and sad, and features the addition of calliope. “But I’m here, down on the pier/You’re never here/There’s no one but me.” Gene Clark Sings For You ends with a country song, “7:30 Mode,” which includes a bit of nice work on harmonica.

The next five songs on this CD are from the recording that Gene Clark presented to The Rose Garden, letting that band choose any they wished to record. They chose “A Long Time,” which ended up on their only LP, The Rose Garden, which you can hear on the new compilation, A Trip Through The Garden: The Rose Garden Collection. Gene Clark’s recording of “A Long Time” has quite a different feel and sound than that by The Rose Garden. This one has a more raw folk sound, particularly because Gene Clark performs it solo. “On Tenth Street” has a bit of a Bob Dylan influence. This one features some excellent lyrics, such as these lines: “And when it looks like it’s going to rain/I’ll just go out and try to find someone to blame/For how much I remember you.” “Big City Girl” is a cool bluesy tune. “The day was so cold/I thought that I had some place to get warm/Didn’t care what I stole/Didn’t see it could it ever bring me no harm.” This one also features some good stuff on harmonica. This CD concludes with Gene Clark’s original demo of “Till Today,” a song that The Rose Garden recorded and included on their self-titled LP. “Far beyond the things I could prove to you/Even past the simple reasons I could find/If loved, I know I never will forget you/And if needed, just to know will ease my mind.”

CD Track List
Gene Clark Sings For You was released on June 15, 2018 through Omnivore Recordings.
Posted by Michael Doherty at 9:57 PM