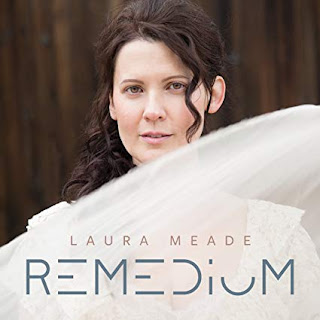 Perhaps most known for her work with the progressive rock band IZZ, vocalist Laura Meade also fronts her own band. She recently released her first full-length studio album, Remedium, which showcases not only her tremendous vocal talents, but also her songwriting skills. With one exception, all of the tracks on this album were written or co-written by Laura Meade. She creates intriguing and detailed landscapes in this music and pulls us in. Though it is a solo album, she does get support from some of her IZZ band mates, mainly from John Galgano, who plays on nearly every track, co-wrote some of the songs, and produced the album.

Laura Meade opens the album with “Sunflowers At Chernobyl,” which certainly has my favorite title of any song on this release, referring to the fields of sunflowers that were planted at the site to absorb nuclear radiation from the soil. When the song begins, the world is in a strange electronic coil. Then Laura Meade’s voice rises through the smoke. Check out these lyrics: “Was it a secret or did we just forget?/My heart is blind/But my mind still can see/Relish in the pain of it/The pain of it.” Randy McStine plays electric guitar on this track. “Sunflowers At Chernobyl” was written by Laura Meade and John Galgano, and is followed by “Conquer The World,” which is the song that really grabbed my interest and made me pay more attention to the album the first time I put it on. There is something delightful and even light about its sound, a surprise after the first track. This comes from the song’s use of ukulele, and also from Laura Meade’s vocal approach, and even from Brian Coralian’s work on drums. And its first lines are “Some days I wanna conquer the world/Most days I can’t get dressed,” which are humorous, but are also lines a lot of us can relate to. The whole song is like that, and is my personal favorite on the album. “One day I’m going to conquer the world/But I’ll take my time.”

At first there is something theatrical about Laura’s vocal delivery on “What I See From Here.” That is, it feels like a song from a musical. “What I see from here/This dizzying height/Mistakes made so long ago/And wishing this were different doesn’t make it so.” From there, the song goes in some interesting directions, soon developing a good groove. And that electric guitar part by Greg Meade gives the track a different feel, a passionate bluesy entreaty. “The Old Chapel At Dusk” is intriguing right from its opening, and captivates us with pauses as much as with the music. This instrumental track builds, developing a sense of foreboding, danger. Laura Meade performs this one solo on piano and chimes. It leads directly into “Dragons,” which begins as a kind of sweet song, sounding like a lullaby, with beautiful vocal work from Laura Meade. “Don’t listen to the voices that speak at 3 a.m./They’re going to lie to you anyway/It’s time to slay the dragons in your head.” There are also brief musical references back to “The Old Chapel At Dusk.” Then abruptly the song takes a turn, a harsh thumping, a strange electronic pulse down a wet street at night, hazy neon lights guiding us, and hands reaching out to us from behind barred windows. From there, this track takes us on further journeys, though eerie night clubs and dreams. “Dragons” was written by Laura Meade and John Galgano. John Galgano plays bass, keys, drums and guitar on this one.

“Your Way” has a kind of dark folk vibe, with some pretty vocal work. Check out these lines, which begin the song: “It’s your way or it’s no way/And there’s no way you’ll compromise/No one can ever win with you/So no one even tries.” I also really like that lead section on acoustic guitar toward the end. Then Laura Meade delivers an astounding vocal performance in “Every Step.” The album concludes with “Irradiation,” the only track not written or co-written by Laura Meade. This one was written by John Galgano. Here is a taste of the lyrics: “Refocus on this life/Recharge the powerless/Recast all the violence/With understanding and with openness.”

CD Track List
Remedium was released on May 18, 2018 on Doone Records.
Posted by Michael Doherty at 3:20 PM