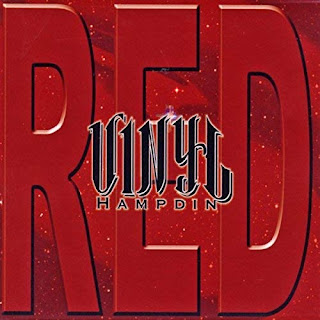 Vinyl Hampdin is a great loud funky beast of a band, led by trombonist and songwriter Steve Wiest, and featuring a horn section and some dynamic vocals. The band’s debut album, Red, is an odd and exciting mix of original material and covers, with even the covers, to a large extent, feeling like originals. The band is made up of Lisa Dodd on vocals, Ryan Davidson on guitar, Eric Gunnison on keys, Stockton Helbing on drums, Gerald Stockton on bass, Art Bouton on baritone saxophone and flute, Frank David Greene on trumpet, Ray Herrmann on tenor saxophone and flute, and Steve Wiest on trombone. These guys seem to draw inspiration from many different musical areas, including jazz, rock, progressive rock, funk and soul.

The band kicks things off with a fun, funky, jazzy rendition of Stevie Wonder’s “Superstition,” the horns having a prominent role, at least equal to that of the vocals. Then the song finds a somewhat mellower place to dwell for a bit, with some nice work on keys. But soon things get wild again. Yes, this group takes the song in some interesting and unexpected directions. And listen to Lisa Dodd belting out the lyrics toward the end. They follow that with an original tune titled “Gottaluvit,” a funky rock song with more nice work on horns, plus some catchy vocals on the title line. And check out these lyrics: “Think you so slick with what you say/The bigger the lie, the bigger the pay/Don’t matter what’s right, don’t matter what’s wrong/Get enough votes and sing a new song.” “Gottaluvit” was written by Steve Wiest.

“One Song,” also written by Steve Wiest, is a strange combination of jazz and progressive rock. We’ve stepped into some other realm now, and it feels like we’ve left everything else far behind. Can we even remember the funk? There is something theatrical here, particularly in the vocals. I’m not as fond of this one as I am of the first two tracks, but there is certainly something intriguing about it. You want to find out where it’s going. The electric guitar turns to hard rock toward the end, and the horns sound like Chicago if that band had something to prove and was heavily armed. (By the way, Ray Herrmann is also a member of that band.) We return to funkier ground with a cover of Bonnie Raitt’s “The Road’s My Middle Name.” Yeah, it’s still bluesy, particularly in Lisa Dodd’s vocal delivery, but those horns take things in a different direction from the original.

Vinyl Hampdin also delivers a very strange rendition of “Flowers On The Wall,” the Statler Brothers song. It’s nearly unrecognizable, except for the lyrics. Gone is the lighthearted sense of the original version, and in its place is someone who is perhaps a bit unhinged and a bit on edge. There is an eerie, even frightening, aspect to this version at moments. It’s different, obviously, but it makes sense, as I always thought the song was about someone in a mental hospital. That’s followed by an original tune, “Billions,” a song that urges us to choose love, something that is incredibly difficult to do these days. “Don’t fear the dark, open your heart instead/How many people are lost?/There are billions, billions.”

This band covers Rare Earth’s “I Just Want To Celebrate,” which seems a perfect choice to follow “Billions,” and a perfect choice for this band. I love this song, and these guys do a great job with it, giving it a fiery, positive energy. They then give us an original song about baseball, “Diamonds.” As you’ll recall, 2016 was a completely foul year. The only good thing from that year was the Cubs winning the World Series. I’m not even a Cubs fan (go Red Sox!), but that Game 7 was fantastic. “Diamonds” refers to the Cubs’ curse in the line, “No goats, my heart can’t take the strain.” That’s followed by a cover of Paul McCartney’s “My Love,” never one of my favorite Paul McCartney songs (but still much better than “Silly Love Songs”) Still, Vinyl Hampdin does a decent job with it. The album then ends with an interesting and powerful rendition of Bill Withers’ “Use Me,” featuring more great stuff on horns, as well as some nice work on guitar. “When you love me, I can’t get enough/And I want to spread the news/That if it feels this good being used/You just keep on using me/Until you use me up.”

CD Track List
Red is scheduled to be released on October 5, 2018 on Armored Records.
Posted by Michael Doherty at 7:59 PM