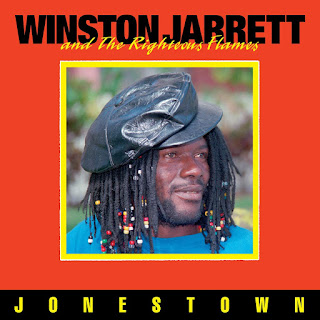 Every day, I struggle with anger, because every day brings more incredibly bad news from the country’s capital and from the rabid followers of the demented puppet pretending to lead. There seems to be no end in sight. And people are now displaying an extremely ugly side that they previously had the good sense to keep hidden. Not only have they now revealed their worst qualities, but they revel in them. They boast of their racism, their bigotry and their stupidity, as if there is something wrong with the rest of us for not sharing in those appalling attributes. Things have certainly become turned around in a way I didn’t think possible, or at least likely. Like a lot of people, I’ve been turning to music for relief and comfort. Reggae deals with troubles and struggles sort of head-on, and yet does so with such a cheerful vibe that it feels almost like the monsters are defeated just by these folks singing about them. There is certainly something to be learned by this approach. A lesson I need to re-learn every few days. Fortunately, a lot of good reggae albums are being re-issued. Jonestown, the 1989 release by Winston Jarrett And The Righteous Flames, originally put out on Nighthawk Records, is now being re-issued by Omnivore Recordings. It’s been remastered from the original tapes, and the liner notes by Leroy Jodie Pierson contain a few photos. Jonestown features mostly original material, written by Winston Jarrett.

The album kicks off with “Bad Boy,” and the beat, the sound, the vocals all work to make me feel good, and it’s not long before my optimism returns. There is certainly some magic in this music. And we can all use a little magic these days. “Lord, I’ve got to keep on moving.” “Bad Boy” is followed by “Hold On To This Feeling,” the album’s only cover, a song originally done by Jr. Walker And The All Stars. This track is full of positive vibes. Then the first line of “Run To The Rock” is “Lots of education it takes to rule the nation.” The line is important enough that it is repeated before the next line. Ah, how much I wish the current leaders were educated, or at least even slightly interested in information. They just don’t seem at all curious about anything outside of their own skin. They are baffling and sad creatures. “Unity” has a nice, positive groove. This music is as vibrant and as needed as it was the day it was recorded.

“Jonestown,” the album’s title track, is about the section of Kingston in Jamaica where Winston Jarrett grew up. The song also mentions Trench Town, the famous nearby area that gave us The Wailers. Reggae is music that remembers one’s roots, keeps them strong, even celebrates them. The song is a bit repetitive, but still enjoyable. That’s followed by “Babylon Broke Dung Me House,” which is a perfect example of a song that tells of serious troubles but has a fun, cheerful vibe and sound. Then I really dig the horns in “Spanish Town Road,” another song about a specific area in Kingston. In this song, Winston Jarrett mentions the market at the corner of Spanish Town Road and Darling Street, and thanks to this internet thing I can look at a map of that area and photos of that very market while listening. Yes, there are moments when I am still amazed by the internet. That song is followed by “Lovers Making Love,” which is kind of simple, yet kind of sweet. And, after all, isn’t love what it’s all about? Why the hell else would we be here?

CD Track List
This re-issue of Jonestown is scheduled to be released on August 3, 2018 through Omnivore Recordings.
Posted by Michael Doherty at 8:24 PM