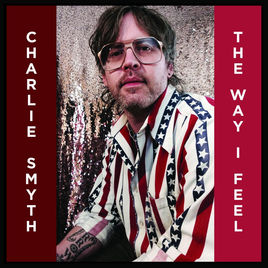 Several years ago Charlie Smyth and his wife, Kalee Smyth, formed The Western Shore and in 2014 released Thunderstorm. Before that, Charlie Smyth had performed in several different bands. Now he’s releasing a new solo album, The Way I Feel. Though it is a solo album and not a Western Shore release, Kalee Smyth sings on it. The rest of the band backing Charlie on this album are Billy Contreras on violin, Andy Gibson on guitar and steel guitar, Jeff Moon on bass, Adam Mormolstein on drums, Eric Penticoff on keys, and Jamison Sevits on horns. The CD contains a good mix of covers and original material, including some songs that he is revisiting, a couple of songs that appeared on Thunderstorm, including that album’s title track. (And though this album is being referred to as his debut solo release, it appears that he actually released a solo album seven years ago, and that a few of the songs on this new release were also included on that one.) The music contains folk, country and pop elements.

He opens it with a pop song from the 1970s that should be familiar to everyone, Neil Diamond’s “Beautiful Noise.” The recent news about Neil Diamond having to quit touring due to health reasons was depressing. I’m glad I got a chance to see him in concert a couple of decades ago. He put on a phenomenal show. Apparently, he’s going to continue to record, which is good. Charlie Smyth delivers a cheerful, wonderful rendition, with violin and horns. It’s faithful to the feel of the original, but has a lot of life in it, and Charlie Smyth’s voice is perfect for the song. Plus, I love the way Kalee’s voice blends with his. I think Neil Diamond fans will appreciate the way the song is handled. Charlie Smyth follows it with an original, “Buddy,” an interesting and unusual song that I seriously dig. “The air tastes like chewed up pencils/Or beat up utensils/Tossed on the desk like forks in the road/Busted forks in the road.” This is a song that was also included on Thunderstorm, but unlike the original Western Shore version, this rendition features some cool percussion. I don’t know what it is about this song, but there is something seriously appealing about it, and it somehow makes me feel good. So there.

I love the way that Charlie Smyth’s vocals are contrasted with the lighter vocals of backing vocalist Kalee, particularly on “Castle,” a song that features some nice work on steel guitar. There is something gorgeous about this album, and the beauty sometimes seems unexpected. Also unexpected is the strange ending of this track. We then get a song with more of a standard country feel, which – after everything that has come before – also manages to surprise me. But this is a cover, “The Cold Hard Truth,” a song written by Jamie O’Hara and recorded by George Jones. Charlie Smyth does a good job with it. I love how Kalee’s voice comes in on “There is a woman we both know/I think you know the one I mean/She gave her heart and soul to you/You gave her only broken dreams.” A woman’s presence on these lines makes them more powerful and sharp, gives them more of an ache. Charlie Smyth and Kalee Smyth also deliver a good rendition of Slim Willet’s “Don’t Let The Stars Get In Your Eyes,” with some nice work on harmonica.

“Far Away” has something of a sweet sound, and features some nice work on keys. “Sometimes I pretend that you don’t rule my world/That the sea doesn’t roar, or the planet turn/Well, never fear, I will not be late/You will not be lonely, I won’t make you wait.” That is followed by “Daggers,” a completely delightful song, another of my favorites. By the way, “Daggers” is a song that was included on Leaves, the 2011 release, though with a different sound. Another of the disc’s highlights is “Paint.” It is a sweet, pretty, mellow tune. And when they sing, “Seems like a nice way to live,” you can believe them. This song is as appealing as the life it describes. “And it’s deep as the bottom of the ocean/Light as a feathered crown/Blue as a pilot light.”

“Shore” is a fun, spirited tune that I love. This one too was included on Leaves, but again has a different sound here. It sounds more like a party, like a glorious celebration on this new album. It’s a bigger production. That is followed by “The Star Spangled Banner,” which might seem like a strange choice, especially these days, when it appears democracy is dead or at least severely wounded. But this is a sweet and kind of sad instrumental rendition performed solo on violin. And it actually makes me hopeful, for it seems to be saying not to give up. It’s like the rest of the band is gone, the rest of the instruments are gone, but this last one, this last voice is still rising up to deliver a hopeful note. Can the country recover? As long as one voice remains in opposition, this track seems to answer Yes.

“That’s The Way I Feel” is the album’s second George Jones song. This one was written by George Jones and Roger Miller, and functions as the CD’s title track (well, close enough). I love the way Charlie Smyth approaches this one, slowing it down slightly at the start to give it a good and catchy rhythm. The way his voice blends with Kalee’s is another wonderful touch. The album then concludes with “Thunderstorm,” which was the title track to the 2014 release from The Western Shore. I actually prefer this new version, which has a fuller country sound and is beautiful. “I’ve been so high for so long/I don’t know who I am/I’ve been so dry for so long/I wouldn’t know water if I saw it again/Thunderstorm, come back to me/Thunderstorm, come back to me/I want you to roll through my dream.”