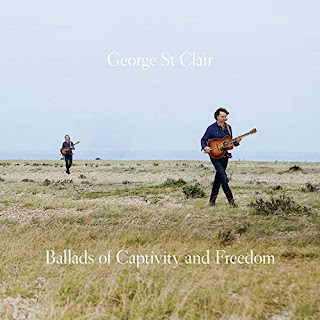 Though currently based in the UK, singer and songwriter George St. Clair grew up in Texas, and his recent album, Ballads Of Captivity And Freedom, is American through and through, with some tracks taking a look at the United States’ history, particularly its relations with Native Americans. The album was recorded and mixed in California, and that certainly contributes to its flavor. The music is a good mix of folk and country, with some excellent lyrics. Joining George St. Clair on this release are Ben Bernstein on bass, Mike Stevens on drums, Dan Lebowitz on pedal steel and electric guitar, David Cuetter on pedal steel, Amy Scher on fiddle, and Kirby Hammel on piano and organ. Maya Abramson and Mark Estall provide backing vocals.

The album opens with one of its best songs, “Tularosa.” This is a wonderful folk-country song with some fantastic lyrics. I was pulled in on the first line, “Listen to me quick now before I tell you some lies.” And check out these lines: “And I learned all the right ways to get it wrong/And taking my time took too long/When I see who gets ahead, I’m glad I fell behind/Now I may be getting nowhere, but I’m starting not to mind.” In a way, those are some depressing lines; yet, this music is making me feel better about the world. And we all certainly need that today. I love the work on fiddle. Plus, George St. Clair’s voice has a friendly vibe, which I appreciate. It seems like everything here is working to tell us, as he sings, “everything is just fine.” That’s followed by another of the disc’s highlights, “The Places Where They Prayed,” an excellent folk song with some nice work on pedal steel. But again, it is the song’s lyrics that really grab me, lines like “People used to love the land/In ways we’ll never understand” and “And how many forgotten ways of dreaming/Are buried under all that asphalt steaming.” This is a song most of us can connect to, or at least a song that most of will want to connect to. This is really a song of our country, a song that our land itself would be singing. It’s interesting, because it has a pleasant sound, when it could have easily taken on an angry tone. “Liberty, she turned away from those who could have used her help.” There is a spoken word section at the end.

“Autumn 1889” tells a captivating story about Native Americans, and the colliding of worlds and ways and beliefs. “They started chanting and swaying all through the night/They were calling for the spirits of every Indian that died/Through the tears that they offered up every night/And they’d been run out from the dens where they’d fought to hold back the tide/Of our numbers and our unyielding desire.” And toward the end there is some beautiful blending of voices. “And now they’re dreaming of a morning/When they can open their eyes/And the plains and the mountains/Will show no trace of our kind.” “Good Times” has a delightful, good-time country groove, getting you tapping your toes and so on. Then its first line is “I don’t know how you can keep on having good times,” which almost for a moment seems directed us for having a good time with this very song. An interesting effect, and it pulled me in. This is a really good song, featuring some nice work on piano. And, like every other song on this album, it includes some good lines. “You keep on having good times though you don’t seem to see/That you’re only feeling better since you’re better off than me/You think that those good times came to you for free/Or they didn’t get that good until you got the best of me.”

“Lie To Them” has a light, pleasant country sound and more nice work on backing vocals. “Deny what you have to do to save your skin/Now go and sharpen up your knives/That’s the only way that they’ll grow in/Let them do the bleeding.” And here is an interesting line, which is repeated: “They’re lying to you/Lie to them.” In this, the sixty-third year of Donald Trump’s presidency, it is sometimes difficult to remember what honesty is like. We have grown used to being lied to because we are lied to by our so-called leaders all day, every day. Republicans are dirty, mendacious cretins who care nothing about their hypocrisy or about this country or about anything other than money. Sad, but true. Also sad but true is that Democrats are going to need to start fighting dirty too. “They’re lying to you/Lie to them.” “New Mexico” is another really good track. I love the line that the border “Divides Spanish and English billboard signs.” It shows that difference in language is fairly unimportant, using the depressing imagery of billboards and the fact that we have them in common. The CD concludes with “Talkin’ Mesquite,” a traditional-sounding folk song delivered as basically spoken word, in the loose, talking blues folk style. “They don’t need your love and they don’t need your care/Just a couple drops of rain a couple times a year/They don't mind oil fumes or car exhaust/Or the bottles or beer cans that drunk drives toss.”

CD Track List
Ballads Of Captivity And Freedom was released on March 2, 2018.
Posted by Michael Doherty at 1:47 AM