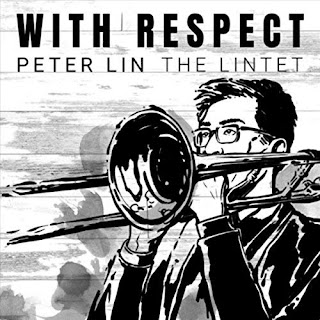 With Respect is the debut album from trombonist Peter Lin and his band, The Lintet. The music here is apparently mostly made up of standards, but not from the Great American Songbook. Rather, these are songs from the Chinese and Taiwanese popular music realms, and so music that might not be familiar to a lot of us. I am glad that these tunes are now becoming familiar to me, because the music on this disc is seriously good. By the way, not all the tracks are standards. There is one original composition, written by Peter Lin. There are notes on each of the tracks in the album’s liner notes, giving us a little background on the compositions. The musicians joining Peter Lin on this release include Anthony Nelson Jr. on saxophone and flute, Oscar Williams II on piano, Ben Rubens on bass, and Nic Cacioppo on drums, as well as some guests on certain tracks.

The album opens with “Forgotten Times,” which actually – according to the liner notes – comes from a film. There is something absolutely delightful about this tune at times. It makes me feel light and happy, in part because of Oscar Williams II’s work on piano. And though it has a nice groove, it also somehow has a calming effect. It’s a thoroughly enjoyable tune. Benjamin Kovacs plays tenor saxophone on this track. That’s followed by “Sweet As Honey,” which has a lively, exciting feel right at the start, with its somewhat unusual rhythm. There is also plenty of cool work on horns to keep us interested. “The Moon Represents My Heart” also raises my spirits immediately. The horns have such a bright and warm and cheerful sound. While the famous version of this song by Teresa Teng has a sweet and gentle vibe, this rendition swings and is quite fun.

“Born Here, From There” is an original composition written by Peter Lin. It has an interesting title, and one that certainly feels personal and relevant to the overall theme of this release. Peter Lin was born in the United States (in Louisiana, and now resides in New Jersey), but is clearly interested in his Taiwanese heritage, exploring the music on this album. And so this composition feels to be the heart of the CD, and its placement right in the center of the tracks seems perfect. It is a thoughtful, engaging tune, featuring lots of moving work on horns, some cool stuff on bass, and some nice work on drums. The album’s other track that is not part of the Chinese or Taiwanese popular songbooks is “My Blues,” composed by Slide Hampton. Peter Lin’s connection to Slide Hampton is strong, and the CD’s liner notes include a note from Slide Hampton. They’ve played together, and apparently Peter Lin is Slide Hampton’s manager. This track pops and moves, and I love the drumming. There is a lot of joy in this recording. Several musicians join Peter Lin on this track, including Anthony Ware on alto saxophone, James Zollar on trumpet, Charlie Sigler on guitar, and Winard Harper on drums. All the musicians have moments to shine, and this track includes a cool bass lead followed by a drum solo toward the end.

Peter Lin’s rendition of “Rose, Rose, I Love You” feels like New Orleans music. It has that kind of joy, that kind of energy, that kind of style. All of the musicians who play on “My Blues” also join Peter Lin for this one. I love this track. The CD then concludes with “Evening Primrose,” featuring Anthony Nelson Jr. on flute. This one too feels designed to make us all feel a little bit better about life, something we can certainly use these days.