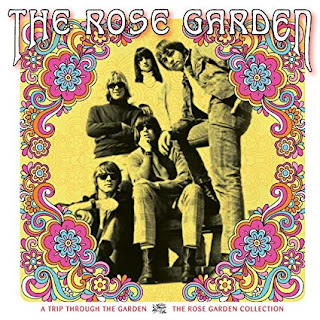 I love late 1960s music, and I’ve been listening to it since my childhood, so I’m surprised when an album surfaces that is completely (or almost completely) new to me. Such is the case with The Rose Garden’s self-titled album, which makes up a portion of the new compilation A Trip Through The Garden: The Rose Garden Collection. While “Next Plane To London” might be familiar, most of the tracks on this compilation are ones I’d never heard before. In fact, half of them were previously unreleased, including several live recordings. The CD contains nearly eighty minutes of music. The music itself is in the folk-rock realm, and some of it will likely remind you of The Byrds. There are a couple of reasons for this. First, as described in the CD’s extensive liner notes on the story of this band, the band members were big fans of The Byrds. The second reason is that Gene Clark wrote a couple of the band’s songs. The Rose Garden’s connection to the former member of The Byrds is detailed in the liner notes.

The compilation’s first ten tracks make up the band’s self-titled album, The Rose Garden’s only LP. That album opens with “Next Plane To London,” which was also released as a single, and was the band’s hit song. It’s a delightful and kind of catchy folk rock tune. Sure, the airport announcements are a bit silly, but it’s an enjoyable song. “Said that over here I wasn’t in/Down in Hollywood I couldn’t find a friend/Who would help me get in/Or listen to me/I’m on the next plane to London.” Interestingly, this hit mentions “any record on the chart.”  That’s followed by one of my favorites, “I’m Only Second.” Its first line, “How does it feel to be the winning one,” makes me think of that boastful, demented airbag pretending to be president. But I’m not going to let that spoil my enjoyment of this song.  I love the feel of this one, and it features a really nice vocal performance by Diana De Rose. There is something beautiful about this song. This disc also includes another version of this song, the acetate version, which was previously unreleased.

As I mentioned, several of these tracks will remind you of The Byrds. One in particular that will certainly do so is “Coins Of Fun,” which has a vibe and sound similar to that of The Byrds. Even the vocal line is similar. Think of their rendition of “The Bells Of Rhymney.” And that guitar part reminds me of their rendition of “Mr. Tambourine Man.” That’s followed by a cool and unusual take on “I Know You Rider,” here simply titled “Rider,” the first line sung as “I know my rider’s gonna miss me when I’m gone.” The Grateful Dead used to perform this one regularly. “I Know You Rider” is followed a Bob Dylan song that the Grateful Dead also played (though not nearly as often), “She Belongs To Me.” The Rose Garden delivers a kind of sweet, quiet rendition, particularly at the beginning. When it kicks in, it certainly has more of a Byrds sound. The Byrds themselves of course covered a lot of Dylan material.

“Flower Town” is an interesting track. It’s a variation on another song, “Portland Town,” which has been recorded by folks like Ramblin’ Jack Elliott, The Kingston Trio, and Joan Baez. This song was the flip side to “Next Plane To London.” I like the addition of flute on this track. That’s followed by “Till Today,” one of the two songs on the LP written by Gene Clark. As you might guess, this is another of the album’s highlights. “And I've got movin' on my mind/Even though it seems so hard to find/The way back home.”  This compilation includes two other versions of the song, including a rehearsal with Gene Clark on vocals and guitar, recorded at John Noreen’s house. How cool is that? The original album concludes with the other song written by Gene Clark, “Long Time.” When it opens, it sounds like a cover of “I Can’t Help Myself (Sugar Pie Honey Bunch).” But then it kicks in. This song is from the five-song acetate that Gene Clark gave the band, allowing them to choose to record whichever songs they wanted. By the way, that five-song acetate is included on Gene Clark Sings For You, which was released on the same day as this compilation.

The Rose Garden released another single, “If My World Falls Through,” which is included on this compilation. It’s an interesting song, beginning as a mellow, thoughtful number, but developing into a surprisingly energetic tune for the chorus. There are actually two versions included – the mono single version and a stereo mix (the stereo mix being longer). The same goes for the single’s flip side, “Here’s Today,” a really cool folk-rock song. “While today flows into yesterday, tomorrow may be lost.” I dig the brief instrumental section at the end.

The first of the previously unreleased tracks is actually one of my favorite tracks on the disc. “Down To The Wire” is a song written by Neil Young, recorded with Buffalo Springfield, and originally included on the compilation Decade.  It’s an excellent song, and The Rose Garden does a great job with it. “’Cause anyone who’s helped you out/Can let you down.” This track has a bit of a psychedelic element. And it’s followed by another of the compilation’s best tracks, “Charlie The Fer De Lance,” a song recorded by The First Edition. This one is seriously cool and unusual, and it features flute. “Charlie had a girl named Frog who played the drums all night/The trouble with their relationship was Charlie’s appetite.” “Dead Men Never Die” comes as a surprise. It was written by Leon Rosselson, and is a serious folk song.

The last several tracks are live recordings from August 1967. The sound isn’t perfect, but it’s still cool to have these tracks. The first is the band’s hit, “Next Plane To London.” That’s followed by a couple of Byrds covers, “So You Want To Be A Rock ‘N’ Roll Star” and “She Don’t Care About Time,” the latter written by Gene Clark and originally included as the flip side to “Turn! Turn! Turn! (To Everything There Is A Season).” Those two are followed by a cover of Sonny And Cher’s “It’s The Little Things.” The final track is “You Don’t Love Me,” a song that was also recorded by Sonny Cher, but was written by Willie Cobbs, and based on an earlier song by Bo Diddley. They introduce it as “another Sonny and Cher song,” and do a really good job with it. This track has a tone of energy.

CD Track List
A Trip Through The Garden: The Rose Garden Collection was released on June 15, 2018 through Omnivore Recordings.
Posted by Michael Doherty at 2:17 PM