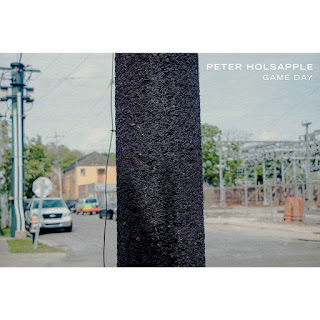 In the opening track of Peter Holsapple’s new album, he asks, “Do I still have what it takes?” He then offers up fifteen more tracks (including three bonus tracks) to answer his own question, that yes, absolutely, he does still have what it takes. Game Day is Peter Holsapple’s first solo album in two decades, and it is an excellent group of songs. He wrote all the material (except for one of the bonus tracks), and plays almost all the instruments. Known for his work with the dBs (who six years ago released their first album in twenty-five years, Falling Off The Sky, Peter Holsapple has kept busy with a variety of projects. But after enjoying Game Day, I am hoping he’ll now focus on more solo material.

The album opens with its title track, and the first lines, “My horoscope read/You oughta stay in bed,” got me on board immediately. Plus, the song has a very cool vibe, and is about playing music. He playfully leaves it to his doctor to tell him, “There’s no reason to quit/So you’d better get used to it.” It seems like the perfect song to open what is his first solo effort in a mighty long time. That’s followed by “Commonplace,” in which he sings “There’s nothing wrong with being common,” a thought no one can really come to terms with. The next line is “We don’t all have to be king,” and yet the most common of all people is now acting as king of our country. (Sorry, sometimes it’s difficult to keep from straying into that territory. I’ll try to keep it to a minimum.) This track builds a bit in intensity toward the end. Then “Continental Drifters” has a sweeter tone, with something of a nostalgic feel, looking back at an earlier band. Susan Cowsill, who was a member of the Continental Drifters with Peter Holsapple, joins him on vocals on this track. “And never was a better time had/And never was a finer band/In a time and a place and a different space/’Til it fell apart in our hands.”

For “In Too Deep,” he delivers an angry, snarling vocal performance which totally fits my mood these days. “In too deep/A hill too steep/I can’t look away/’Cause I don’t know how.” And it comes to us over a steady thumping rhythm. There is also some good work on electric guitar. This is a song I think I’ll be playing a lot. It is followed by “Inventory,” which has become one of my favorites. The first time I listened to the album, this is a song that grabbed me partway through. Check out these lines: “Now everyone and everything is gone, and they left me all their stuff/’Cause we all knew that memories alone would never be enough.” There is something oddly catchy about this song, and a weird joy in his voice when singing “Everything is gone” at the end. That’s followed by another of my favorites, “I Got High With You.” Something about this one makes me laugh (and I’m not even high at the moment) – the way he sings it, the tone. “We can talk about the president/We can talk about it all night long.”  For some reason, these lines about getting high by ourselves make me smile: “That’s nothing new/That’s just what we do.” I love this song, and enjoy it more each time I listen to this disc. It’s a gloriously quirky and honest pop song.

“She Handed Him A Pencil” is one of my two favorite song titles on this album. This one has kind of a punk groove to start, and I dig that bass. It’s a strange, intriguing song, with plays on words like “write” and “right” (“You’re supposed to be the writer, right?/So write something tonight”) and then “bear” (“And he went out and thought he shot a bear, but he couldn’t bear to look”). And I love his surprising delivery of “That boy ain’t right.”  The song with my other favorite title is also one of the album’s most enjoyable tracks, “Don’t Ever Leave.” From the moment this one begins, with the whistling, it is just absolutely wonderful. “Sometimes I turn up my radio real loud/Sometimes I try to stay out of the crowd/Sometimes I feel like I’m yelling at clouds/Just yelling, just yelling, yelling at clouds.” Oh yes! This is a song I could listen to all night. Maybe I will. But of course there are several fantastic songs on this album, including “The Smartest Thing I’ve Ever Done,” which had me from its opening line, “There is no sense in what I say, what I’ve done or what I tried to do.” How is that for an excellent first line? “And I’ve been told a thousand times by people better than myself/That this was not the smartest thing that I have ever done/No, not so smart, I agree.” This is the final track of the bulk of the album. The remaining tunes are labeled as bonus tracks.

The first bonus track is the only cover on the album, an excellent, thumping version of Buddy Miles’ “Them Changes,” combined with The New York Rock And Roll Ensemble’s “Sing Lady Sing.” The two songs have extremely similar openings. Jeremy Boomhower joins him on trumpet and trombone for this one. This track has a strange, sudden ending. The CD then concludes with both songs from the single that Peter Holsapple released last year. The first, “Don’t Mention The War,” has something of a Neil Young vibe at the beginning. This is a tremendous song, and I’m glad it’s included here. There are some excellent lyrics, like “And he gives off a smell that’s like old rotten meat/And he opens his eyes, and he’s still seeing the dead/And he’s trying to get back to her couch in his head/So don’t mention the war.” The flip side is “Cinderella Style,” an odd tune that I can’t help but like. The musicians joining him on these tracks are James Wallace on piano, drums and vocals; Mark Simonsen on drums, acoustic guitar, vibraphone and vocals; Skylar Gudasz on flute; and Mark Daumen on tuba. “Hanging from a rock/The metamorphosis is incomplete/She made it out to be so bad/But all it really was was true Cinderella style.”