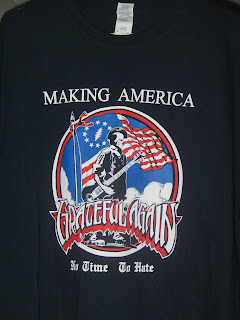 Yesterday my friend Jon and I caught a really good show by Dead And Company. We ended up parking fairly close to Shakedown Street, so after the show we walked through, checking out all the wares. The last thing I needed was another T-shirt, but I saw one that I couldn’t resist purchasing. It was exactly right for me and for our current landscape. On the front it says, “Making America Grateful Again,” obviously a play on the slogan of that racist moron currently pretending to be president (a slogan he stole from Ronald Reagan, by the way). But also it touches upon the way a lot of us in this country feel, grateful that these musicians are touring again, spreading the good times. The picture on the front of the shirt is close to that which was on the back of the very first Grateful Dead T-shirt I ever owned, a “Twenty Years So Far” shirt from 1985. Below the picture is a line from “Uncle John’s Band”: “No time to hate.” (Well, the full line in the song is “Ain’t no time to hate, barely time to wait.”) A good reminder to myself when I read the news or when some fool comments on something I’ve posted. 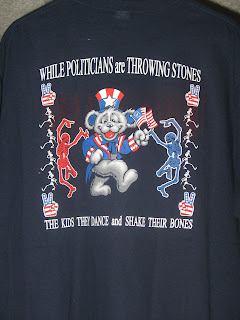 The back of the shirt makes use of lines from “Throwing Stones,” a song that feels more relevant than ever. It reads, “While the politicians are throwing stones, the kids they dance and shake their bones,” a slight change from the song’s lines “And the politicians throwing stones/So the kids they dance and shake their bones.” (Those lines are toward the end; earlier in the song, the two lines are reversed.) The artwork reminds us that Donald Trump and his like are not representative of what this county is supposed to be about. There is still good out there.

So, yeah, it’s easy to see why I needed to buy this shirt. Anyway, I just thought I’d share that with you.
Posted by Michael Doherty at 3:33 PM