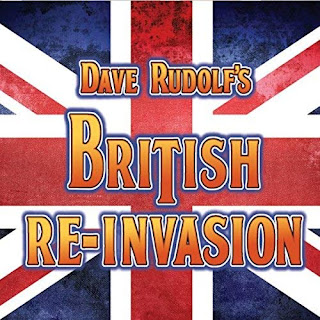 Dave Rudolf is a singer and songwriter who has released more than thirty albums, covering a lot of musical ground. I first listened to him a couple of years ago when he released a folk album titled Let It Roll. His new release (well, new as of a few months ago; it is possible that he’s released another four or five discs in the meantime), titled British Re-Invasion, is an album of covers of songs from British artists, songs he listened to in his youth. So this is music that means a lot to him, music that inspired him, music he has a passion for. Joining him on this release are Marc Adrian on guitar, Jim Widlowski on drums, John Chorney on keys, Rick Ariail on keys, Wally Hustin on bass, John Lawler on harmonica, Al Joseph on violin, and Marsha Lynne Smith on backing vocals.

Not surprisingly, Dave Rudolf begins this album of homage to the British Invasion with a Beatles song. Makes sense, right? The song he chooses is “Rain,” which was originally released as the flip side to “Paperback Writer.” This is a song that the Grateful Dead used to cover occasionally in the 1990s (I saw a really good version in Eugene, 1994), but is certainly not one of The Beatles’ most covered tunes. This version from Dave Rudolf is a decent, respectful cover, with some nice work on both bass and guitar. He extends it a bit at end, which I appreciate. “Rain” is followed by a somewhat goofy rendition of The Hollies’ “Carrie Anne,” with an island or reggae feel. Then again, this song was always a bit silly, and it’s cool that Dave Rudolf does something a bit different with it. This one is extended a little too.

Dave Rudolph lets his vocals get rough for his rendition of “Don’t Let Me Be Misunderstood,” a song that was not originally part of the British Invasion. But it was covered by The Animals, who had a hit with it, and the song became associated with them. I like the backing vocals, which give it a different feel. There is also a cool section on harmonica. That’s followed by another song that was not originally part of the British movement, but became associated with a British group. “Tobacco Road” was written and originally recorded by John D. Loudermilk, but the version everyone knows is that by The Nashville Teens, an English band. It has since been covered by a lot of artists. This song is one of the album’s most fun tracks. It is a good, energetic, rockin’ version, with more good work on harmonica as well as some delicious stuff on keys.

The second of three Beatles covers on this album is “Hey Bulldog,” another interesting choice. This one features Ryan Rudolf joining him on backing vocals. I’ve always really dug this song, perhaps in part because it was on the very first Beatles cassette I ever owned, Rock ‘N’ Roll Music Volume 2. This is a really good rendition, with some nice work on guitar. Dave doesn’t bother with the barking and spoken word part at the end. The third and final Beatles song is “While My Guitar Gently Weeps,” featuring some good work on keys. And of course an album of British Invasion songs has to have at least one Rolling Stones tune. For that slot, Dave Rudolf chooses “Beast Of Burden,” a somewhat surprising choice, since it is from the late 1970s, long after the initial British Invasion. He follows that with a Who song, “The Kids Are Alright,” which for some reason on the back of the CD case is listed as “The Kids Are Allright.” It’s probably just a typographical error, for the next song too contains a typo. Anyway, on “The Kids Are Alright,” he goes for that raw power and energy of the original, but falls a bit short, partly because it feels like an attempt at recreation. Still, it’s an enjoyable rendition.

Dave Rudolf, to some extent on certain tracks, attempts to sound like the singers who originally recorded these songs. And on Cat Stevens’ “Tuesday’s Dead” (on the CD case listed as “Tuesdays Dead”), it comes across as a bit weird, a bit false. “Tuesday’s Dead” is from Teaser And The Firecat, one of my favorite Cat Stevens albums (second only to Tea For The Tillerman), and is a fantastic song, one of his most energetic tunes. Dave Rudolf does capture the bright energy of the song. After the small errors in the titles of both “The Kids Are Alright” and “Tuesday’s Dead,” there is one title on the CD case that is really off. Whenever folks would ask me, “Beatles or Stones,” I would always answer, “Kinks.” The Kinks put out more good music than either The Beatles or The Rolling Stones. On this disc, Dave Rudolf covers “Tired Of Waiting For You,” and for some reason on the case it’s listed as “So Tired.” It’s an interesting rendition, feeling just a bit slower than the original, almost like he really is tired. Also, he sounds genuinely thoughtful and loving on the line “It’s your life and you can do what you want.” It’s a wonderful delivery. Another artist I absolutely love is Donovan, and Dave Rudolf covers “Jennifer Juniper,” a song that comes up every time I talk with my friend Jennifer Byrd. This rendition features some sweet work on violin.

One of the strangest choices for this release is “Unchain My Heart.” Obviously, it’s not a part of the British Invasion. Not at all. It was done by Joe Cocker, but more than twenty years later, on his 1987 release which was also titled Unchain My Heart. In the liner notes, Dave admits this song choice “is a bit of a stretch here.” (Actually, there is another typo, and it reads “a bit if a stretch here” – please proofread, people!) Dave delivers a good rendition, with some nice backing vocals. Scott Ashley joins Dave Rudolf on guitar on this track. The other strange choice is “Hey Joe,” which concludes the album. The song is not British, and the artist that most people associate with this song (though he did not do the original version) is Jimi Hendrix, who is also not British. However, his band at this time was British, and the band was based in London. So that’s how it fits in. And the version here is similar to that by The Jimi Hendrix Experience. Ryan Rudolf plays bass on this track.

CD Track List
British Re-Invasion was released on February 9, 2018 on Moneytree Records.
Posted by Michael Doherty at 1:26 AM