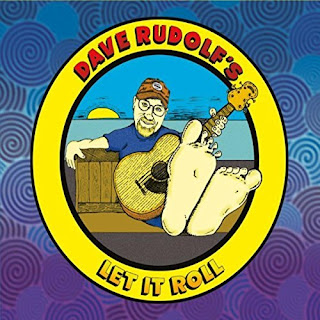 Dave Rudolf has been writing and performing for quite some time, and has released approximately thirty albums, including Halloween and Christmas CDs  (I’m interested in hearing the Halloween ones, of course), with much of his music aimed at children. One of his latest releases, Let It Roll, is a folk album not aimed at children (though children may still enjoy it). It contains mostly original material, with some tracks, such as “You’re Getting Old,” showing his sense of humor. On this release, he is joined by Rick Ariail on keys, Jim Widlowski on drums, Scott Ashley on guitar, Wally Hustin on bass, Gary Victorine on pedal steel, John Lawler on harmonica, Mark Adrian on electric guitar, Pat Otto on mandolin, and Al Joseph on violin. Backing vocals are provided by Marsha Lynne Smith and Dianne Laffey.

This CD opens with its title track, “Let It Roll,” a song with a positive, friendly vibe, a song about not allowing ourselves to get too stressed out, not holding onto troubles and anxieties. “It’s easy to let it roll,” he tells us. Sometimes it doesn’t feel that way, but it’s good to keep in mind. And this song’s comforting feel should help. “This world is stressful/It’s such a mess/They don’t listen to you/So don’t get stressed.” This song also contains a Hamlet reference: “There are slings and arrows.” Dave follows that with a more bluesy folk tune titled “Gandy Dancers,” about railroad workers (“gandy dancer” is a term for the workers who laid the tracks). The song has that steady rhythm of repetitive work, creating the atmosphere of the railroads. It’s a cool tune.

Dave then chooses a sweeter, sadder sound for “Missing You,” a song about people who have come to lead separate lives through they are living in the same home. “Yes, I’m missing you/I’m still missing you/Though you’re right here.” He follows that with one of the CD’s two covers, a cool folk rendition of “The Glory Of Love,” a song that was a hit for The Five Keys, and has been covered by many artists over the years, including Peggy Lee, Otis Redding, Tom Rush and Paul McCartney. Dave Rudolf’s rendition has a positive, happy groove and feel. You can basically hear his smile in his vocal delivery. Plus, there is a nice instrumental section, including some good stuff on violin by Al Joseph. Doug Lofstrom plays stand-up bass on this track.

The acoustic guitar part at beginning of “Get In The Game” reminds me of “Mother Nature’s Son.” But when the song kicks in, it takes on a different feel. This is another with a positive message, as Dave sings, “Don’t think that you can’t make a difference/That your help is meaningless.” On the more humorous side is “Procrastinate,” a cool, bluesy number celebrating procrastination, a song I appreciate. He sings, “I was late coming out of my mother’s womb/I’ll probably be late when they lay me in my tomb.” I love that play on that other meaning of “late.”  I myself was a week late entering the world. I was in no hurry. I never cared to rush, even then. This song features some good backing vocals. Felton Offard pays guitar on this track. Also humorous is “You’re Getting Old.” And yes, these songs about aging have become more pertinent and dear to me, and seem to be speaking more directly to me than before. “You’re getting old when your body starts creaking/You’re getting old when your memory is leaking/You can grow hair on your rear/In your noise and in your ears/But on your head it’s disappeared/Let’s face it, you’re old.”  Oh god, that is me all right. My bones creak, and my memory frightens me at times, and yup, hair is appearing in areas it has no business being, this after it has abandoned my head. Also, I love these lines: “When you getting lucky means finding your lost keys” and “And your back goes out more than you/When you hate things because they’re new.” This is delivered as a country number, featuring violin and pedal steel. Jim Frels and Steve Wing provide backing vocals on this track.

The album’s second cover is “Bedlam Boys,” also known as “Tom O’Bedlam,” a traditional piece. This one too features some nice work on violin. The CD concludes with “That Girl’s Not Right,” which is more in the pop and rock realm. “You get so lost and desperate/You might lose your soul/So tighten up your seat belt/Because it’s a bumpy night.”

CD Track List
Let It Roll was released on April 13, 2016 through Moneytree Records.
Posted by Michael Doherty at 1:22 PM